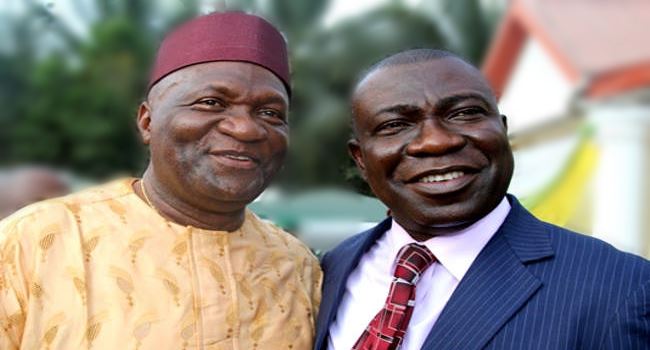 Ohanaeze Ndigbo has reacted to reports that its leader, Chief Nnia Nwodo and a former deputy senate president, Ike Ekweremadu, allegedly got N6.2 billion bribe from President Muhammadu Buhari to allow the setting up of RUGA in the South-East.

The allegation currently making the rounds in the social media and reportedly started by a traditional ruler from Umuchigbo Abakpa in Enugu State, whose identity was not revealed.

But in a statement signed by Nwodo’s media aide, Emeka Attamah, the Ohanaeze leader described the news as fake.

The statement said Nwodo and Ekweremadu had no authority over lands in Enugu or anywhere else in the South-East.

The statement read: “Our attention has been drawn to an insidious social media story making the rounds that the President General of Ohanaeze Ndigbo Worldwide, Chief John Nnia Nwodo, and a Distinguished Senator and former Deputy Senate President of the Federal Republic of Nigeria, Professor Ike Ekweremadu, collected a whopping N6.2 billion from President Buhari out of N22.2 billion budgeted to plant RUGA in the country.

“The story which was purported to have emanated from a faceless traditional ruler from Umuchigbo Abakpa in Enugu State sounded preposterous and deserves to be consigned to the dust bin where it rightly belongs knowing that the purveyors of the story may have underestimated the intelligence of some audience of the social media but who certainly may not be as gullible as they think and will do with some clarifications.

“Why did the writer not mention the name of the traditional ruler and whether he was there when money exchanged hands? One would have expected their detractors to have established the veracity of their claim by giving an insight into how the money exchanged hands or through which bank accounts they were remitted to Chief Nwodo and Senator Ekweremadu.

“Again, Chief Nwodo and Senator Ekweremadu are not traditional rulers and therefore don’t have custody over land in the South East. They should also have authenticated their allegation by stating where the said RUGA settlements are in Enugu State or in the South East.

“It is sad that despite all Ohanaeze Ndigbo has been doing to improve the image of Ndigbo in the comity of Nigerian Nations and efforts to restore Ndigbo to their rightful place in the country, either some Igbo sons and daughters still allow themselves to be used to deride their own or some external forces are determined to undermine the unity of Ndigbo, afraid of what strength Ndigbo can derive from such unity. It is pertinent to put the public on notice that more of these senseless, vitriolic and demented attacks are expected to come from the stable of these traducers.

“It is also worthy of note that many Igbo organizations abound which are out to enrich their pockets and have opened bank accounts where they deceive Ndigbo to pay money into, money that is usually unaccounted for.

“These organizations only lay claim to their existence by attacking Ohanaeze Ndigbo and its leadership. The consolation is that social media users are knowledgeable and discerning to disregard such mercenary organizations.”