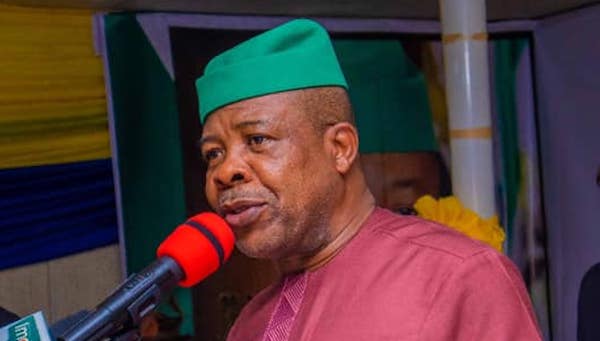 The leadership of the Peoples Democratic Party (PDP) in Imo State on Wednesday dismissed report on the planned defection of the state’s former governor, Emeka Ihedioha and other party members to the All Progressives Congress (APC)

The party in a statement signed by its Publicity Secretary in the state, Mazi Ogubundu Nwadike, branded the report as “mischievous and poorly scripted.”

Ihedioha, according to the statement, remained a loyal and life member of the PDP National Executive Committee whose commitment to the party has never been called to question.

The statement read: “Ordinarily, we would not dignify such inanity with an official response, but to ensure that nobody is held in doubt about the falsehood inherent in the said story. We not only declare unequivocally that Rt. Hon. Emeka Ihedioha has no plans to leave our dear party, we authoritatively add that he and other leaders of our party in the state have no reason to contemplate such action.

“It is very evident that Rt. Hon. Ihedioha, a life member of the National Executive Committee (NEC) of our party, is a consequential stakeholder and leader whose loyalty and commitment to the PDP since its formation has never been called to question.

“His integrity quotient has been tested and proven. It may be necessary to remind that it was via PDP that he has served our country in various high offices, including – Chief Whip, Deputy Speaker and Speaker of the House of Representatives and only recently, elected Governor of Imo State overwhelmingly by the people of Imo State.

“However, we are not oblivious of the clandestine efforts by fifth columnists who have perpetually lost sleep over the goodwill, respect, and massive support Rt. Hon Ihedioha enjoys in the state and across the country. The good news is that the sponsors of the joke, are not unknown to Imolites and Nigerians. Without any need to yet publish their identities, we will only assure them that their pettiness is inconsequential.

“PDP wish to assure our teeming members, supporters, Imolites, and Nigerians in general and indeed reiterate that there is no iota of truth that our members are leaving to another party.

“Only recently, Hon Pascal Okolie, member of the Imo State House of Assembly representing Orlu State Constituency announced his defection and his followers from the ruling APC to our party and we are expecting more to follow soon.”

Ihedioha, who was elected the Imo State governor in May 2019, was sacked by the Supreme Court in February this year.

Governor Hope Uzodinma, who assumed office following Ihedioha’s removal, has promised to probe some former governors of the state over their management of the state affairs from 2007 till 2019.