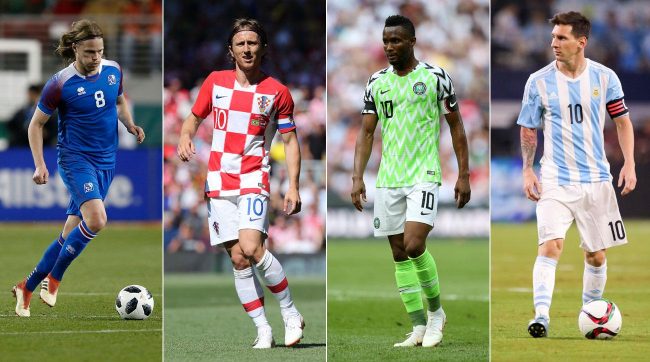 The Super Eagles of Nigeria will kick off their Russia 2018 FIFA World Cup campaign this weekend when they face Croatia at the Kaliningrad Stadium.

The Nigerian men are billed to also battle Iceland and Argentina in the group stage of the global showpiece which begins in two days’ time.

With home fans eagerly hoping to see the Eagles advance from the acclaimed ‘group of death’, Ripples Nigeria’s Ben Ugbana lists 10 players that could make the ride uneasy for Gernot Rohr’s men…

The Everton attacking midfielder is the star of Iceland’s national team and has long been used as a midfield playmaker by his country. He was a member of the Iceland squad that played in the UEFA Euro 2016 competition where they reached the quarterfinals after beating England’s Three Lions in the second round.

He plays as a striker for German Bundesliga club FC Augsburg and will be at the forefront of Iceland’s attack at the World Cup. The 29-year old was a one time top scorer in the Dutch Eredivisie with 29 goals in one season. And for Iceland, he has scored 13 goals since his debut in 2010. His prowess upfront could shake up the Nigeria’s defence when both side meet in Russia.

He is the captain of Iceland. He led them to the last eight of the Euro 2016. The 29-year old was instrumental to Cardiff City’s promotion to the English Premier League in the just-concluded season. His characteristic tough tackling, fearsome-looking figure and simple passing ability could strenghten his national team in the midfield at the World Cup.

The Croat forward is a prolific goalscorer with 22 goals to his name at Juventus. He scored twice for Juve in the reverse fixture of their Champions League quarter-final tie with Real Madrid at the Bernabeu as the Serie A side almost completed an incredible comeback victory. The Russia tournament will be his second World Cup; and he has netted 30 goals for the national side since his debut.

A Champions League winner with Real Madrid, the midfielder has been called a little magician who is unarguably one of the best midfielders in the world. His impressive form with the European champions can be put to a great use for his country at the World Cup. He may cause some stir in the middle when the Croats play against Nigeria.

The Barcelona’s central attacking midfielder has represented his country at UEFA Euro 2008, UEFA Euro 2012, the 2014 FIFA World Cup and UEFA Euro 2016, earning over 90 caps. His combination with Modric and Mateo Kovacic in Croatia’s midfield is difficult to match. With his vast experience in the game and great skills, he could shine so bright in Russia.

The Argentine forward is among the team that reached the final of the 2014 World Cup but fell to Germany. He was a member of their 2010 World Cup squad too. The 2018 edition is another opportunity he would want to seize as the South Americans gun for a third World Cup title. Aguero helped Manchester City win the English Premier League this season with 21 goals and 6 assists. The 30-year old, who was taken to hospital after fainting in the dressing room at half-time in a 4–2 loss to Nigeria in a friendly match last November, could be a thorn in the flesh for the Nigerian defence on June 26.

The 30-year old midfielder will also be playing at his third World Cup in Russia. He plays as a winger also, and has gained experiences from five football clubs since the start of his playing career. Russia might be his last appearance at the global showpiece, hence the Paris St-Germain star would definitely be eager to give his very best.

The defender had a successful season at Manchester City. He goes to the World Cup after contributing to the record-breaking season for Pep Guardiola’s side. With the 30-year old standing at the center of Argentina defence, Super Eagles’ forwards could face a hard time reaching for the post on matchday 3.

The eyes of the entire world are on Messi. He helped Barcelona to win the La Liga and Copa del Rey titles in the just-concluded season, and much is expected from him as he leads his national team in Russia. Having won a number of titles in his career, the Barcelona superstar is looking to win his first World Cup title. The 2018 finals will be his last, and so, Messi could intelligently dazzle through every opposition that stands between him and the goal post.