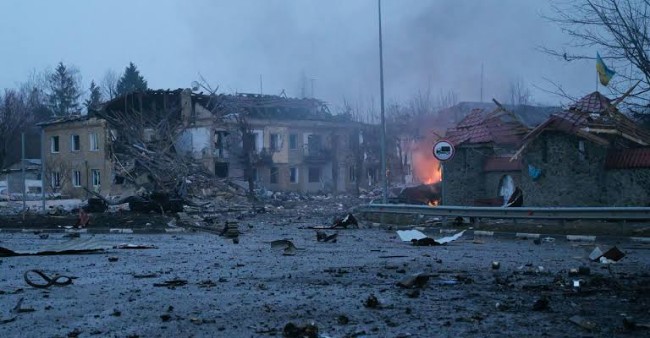 Russia on Saturday, declared a temporary ceasefire in two key Ukrainian cities of Mariupol and Volnovakha, to allow the creation of humanitarian corridors to evacuate civilians.

Both cities are within Donetsk, one of two breakaway Ukrainian regions that Putin recognized as independent just before his troops invaded Ukraine.

The ceasefire which went into effect at 2am, will cover both Mariupol and the smaller nearby city Volnovakha, according to the Russian ministry of defense said.

Military adviser to Ukrainian President Volodymyr Zelenskyy, Mykhailo Podolyak, said on Twitter that the evacuation corridors were being prepared and that a ceasefire was in effect in those areas, while Mariupol’s city council officials said evacuations would begin at 4am and would last until the end of the ceasefire at 9am.

“In Mariupol and Volnovakha, evacuation humanitarian corridors are being prepared for opening, and columns of those to be evacuated are being formed. The parties temporarily ceased fire in the area of ​​corridors,” Podoliak said.

The ceasefire came after a second round of talks between the two countries on Thursday produced an agreement on the issue, though no progress on a broader cease-fire or an end to Moscow’s invasion of Ukraine.

Pavlo Kirilenko, head of the Donetsk military-civil administration that governs Mariupol, said the humanitarian corridor would extend to Zaporizhzhia.

“Today, March 5, from 10 am Moscow time (0700 GMT), the Russian side declares a regime of silence and opens humanitarian corridors for the exit of civilians from Mariupol and Volnovakha,” Kirilenko said in the statement.

The ceasefire agreement follows Zelensky accusing NATO of being responsible for civilian deaths as they refused to declare a no-fly zone over the country after the defence bloc said it was not seeking to go into a conflict with Russia by declaring a no-fly zone which could be seen as a declaration of war by Russia and may escalate the ongoing crisis.

Related Topics:troopsUkraine Russia war
Up Next

27 Malian soldiers killed in rebel attack at military base