RWANDA: 5 refugees killed, 20 others injured in violence sparked by cut in food rations 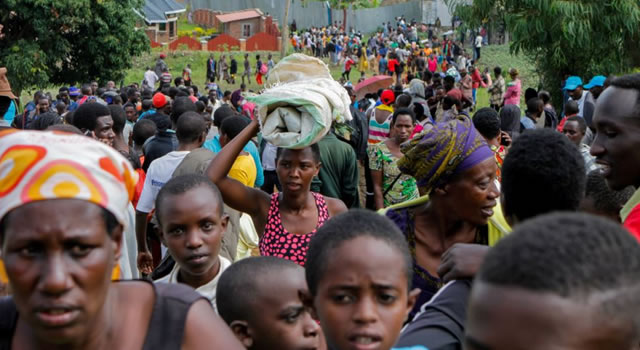 A tragic scene played out at a camp in Rwanda when protest over cut in food rations turned violent, with no less than five refugees reported dead and 20 others including seven policemen injured.

According to police spokesman Theos Badege while speaking on state radio, police tried to disperse over 3,000 refugees who had camped outside United Nations offices at the camp since Tuesday with teargas when the gathering turned violent.

“We used force … yesterday afternoon after warning that security forces would be used,” he said.

“They started pelting stones, pieces of metal and in that 20 refugees were injured and seven police officers. Five of the refugees died.”

The violent scenes triggered by police was criticised by the UN which said appeals for maintaining calm and restraint were not considered.

“We regret that our continued appeals for maintaining calm and restraint were not considered. This tragedy should have been avoided, and disproportionate use of force against desperate refugees is not acceptable,” Cécile Pouilly, UNHCR spokeswoman, said in a statement.

“UNHCR calls on authorities to refrain from further use of force and to investigate the circumstances of this tragic incident.”

Related Topics:20 others injured in Rwanda5 refugees killedNigerian newspapersripples nigeriaRwandaViolent sparked over cut in food rations at Rwanda refugee camp
Up Next

US: Rifle association kicks against plans by Trump to change gun laws