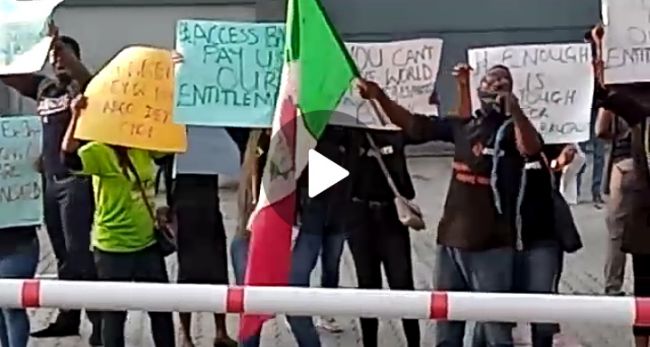 The workers in their hundreds claimed they were let go by the bank with no benefits.

One of the protesting workers told Ripples Nigeria that they were sacked on May 1st, but that when the Central Bank of Nigeria intervened, the bank said they didn’t sack anyone.

“Suddenly on November 30th we got another round of termination letters from our employers who claimed we were not sacked.

However, a staff of Access Bank corporate communications department told Ripples Nigeria on condition of anonymity, that the protesting workers were not permanent employees of the bank.

He stated that they are employees of an outsourcing company, Integrated Corporate Services the bank used to fill some positions like tellers, teagirls, cleaners and security men among others.

He lamented that they took their protest to Access Bank because they felt the bank was an easy target, and that it would give more attention to their plight.

He further explained that with the advent of covid-19 the bank had to close down some branches, and since many other direct staff were working remotely, there was less need for some category of workers.

“They are not direct staff of the bank. They are outsourced staff and it’s the responsibility of their direct employers to settle them”.

This was confirmed by one of the protesters, who revealed that majority of them were outsourced workers, and that the sacked Access Bank workers among them have been paid off, so they were not involved in the protest.

LATEST TECH NEWS: Salesforce acquires Slack for $27.7bn. 2 other things and a trivia you need to know today, December 2, 2020