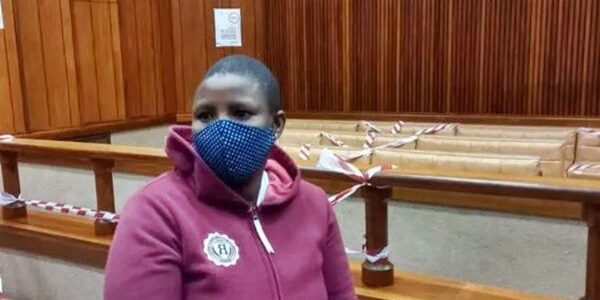 A 34-year-old self-confessed lesbian, Busisiwe Labi, has been sentenced to 22 years and six months imprisonment by a South African court for killing her two children.

Labi, from the Dimbaza province on Thursday, confessed in court that she had given birth to the two boys to appease her homophobic mother, and that she later murdered her sons to punish the mother.

Labi told the Bhisho High Court in the Eastern Cape that she informed the children of her plans to murder them and that the older boy had pleaded in vain with her to reconsider.

She said she suffocated her two sons Othandwayo, one, and Amyoli, six, with plastic bags at their home in Dimbaza outside Qonce last September.

During her testimony, she also told the court how she first prayed to God with the boys before taking turns to suffocate them to death.

NPA Regional spokesperson, Anelisa Ngcakani, told the court that Labi had killed the kids while still living at her home in Dimbaza with her children, her mother and her two siblings.

“Labi suffocated her two boys to death, one-year-old Othandwayo and six-year-old Amyoli, with plastic bags at their home last September.

“Before murdering them, she informed the children of her plans to kill them. The eldest boy, Amyoli, pleaded with her not to do so but his plea fell on deaf ears.

“She prayed with the boys, took turns to suffocate them to death with plastic bags and pillows and thereafter laid their bodies neatly on a bed,” Ngcakani said.

A Psycho-Legal report presented in court revealed that Labi confessed to being a lesbian since Grade 7 and that her family did not approve of her sexuality.

The report further stated that Labi had said that she engaged in heterosexual relationships with the fathers of her children because her family did not approve of her homosexuality and that her mother wanted grandchildren, adding that she had the boyfriends to satisfy her mother.

“A day before murdering her boys, Labi got into an argument with her mother as the mother gave her younger brother money which was meant to be used for items in the household.

“Labi felt that her mother favoured her brother over her. It was revealed during sentencing that Labi also murdered her two boys because she wanted to cause her mother grief as the mother had a close relationship with her grandchildren,” Ngcakani said.

After Labi murdered her children she phoned her 42-year-old sister and told her what she had done. The matter was reported to the police who found the bodies of the boys at their home.

After hearing from the prosecution and also based on Labi’s confessions, Judge Belinda Hartle of the Bhisho High Court handed her the jail term for each of the children’s murders but ordered that the sentences run concurrent.