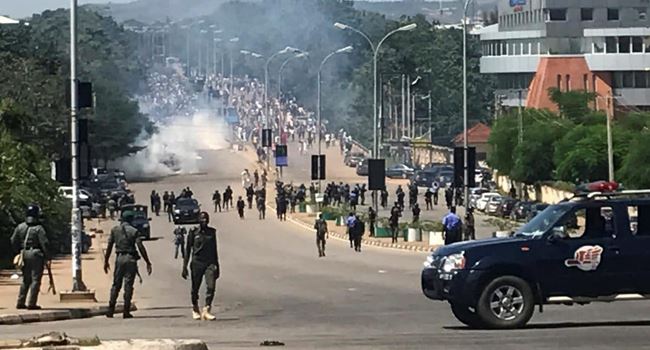 The town of Sagamu, Ogun State, on Monday erupted in violent protest over the killing of a footballer and deputy captain of Remo Stars Football Club, Tiyamiyu Kazeem allegedly in the hands of operatives of the Nigerian Police.

The protest, which reportedly started on a peaceful note is said to have claimed the life of one person.

The protesters were said to have taken to the streets and later proceeded to the palace of Akarigbo and the Paramount Ruler of Remoland, Oba Babatunde Ajayi, demanding justice for the deceased.

The protesters, who condemned the incessant brutality and indiscriminate arrests by law enforcement agents in the town and its environs, moved from one point to the other chanting anti-police slogans.

A former Ogun State Governor, Otunba Gbenga Daniel, joined the protesters at the palace in solidarity and to appeal to them to be calm.

Similarly, a member of the House of Representatives representing Remo Federal Constituency, Mrs Adewunmi Onanuga, and the state Commissioner for Women Affairs and Social Development, Mrs Funmi Efuwape, also joined efforts at the palace in appealing to the protesters.

The state police command is said to have deployed armed policemen to the town in an effort to prevent the protest from degenerating.