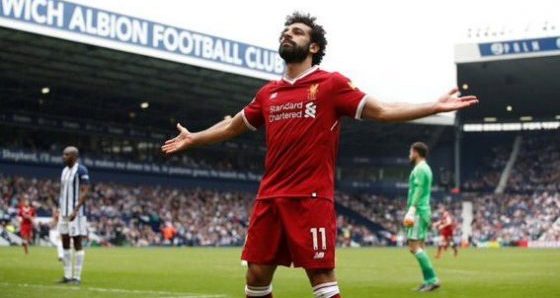 Reigning African Player of the Year, Mohamed Salah increased his goals tally to 31 this season for Liverpool in a 2-2 draw against bottom-placed West Brom in the Premier League on Saturday.

The Egyptian forward equaled the record for most goals in a single season in the Premier League as he now stands alongside Alan Shearer, Luis Suarez and Cristiano Ronaldo.

West Brom, who could still be relegated this weekend despite the draw, were trailing in the fifth minute of the game when Danny Ings fired past goalkeeper Ben Foster.

Read Also: On fire! Ighalo scores four to inspire Changchun Yatai away win
Salah doubled the lead for Liverpool in the 72nd minute, and the visitors thought they are heading to a win at the Hawthorns.

But the home side staged an incredible comeback by scoring twice in nine minutes to earn a point from the game.

Jake Livermore and Salomon Rondon were the goals scorers for West Brom on 79th and 88th minutes respectively.