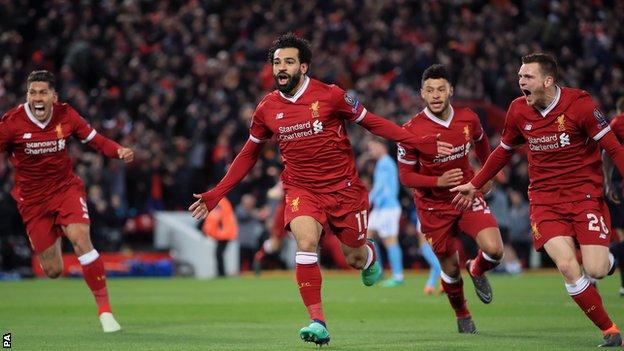 Reigning African player of the year, Mohamed Salah, opened the scoring for Liverpool and was involved in another goal as the Reds hammered Manchester City 3-0 at Anfield on Wednesday night.

With the result, the brilliant home side are taking a big lead into the second leg of the UEFA Champions League quarter-final tie.

Following a heated start to the encounter, Egyptian captain, Salah, put the hosts ahead in the 12th minute with a cool close range finish from a pass in the box by Firmino.

Alex Oxlade-Chamberlain then fired home from outside the penalty area to double their lead in the 20th minute, before Senegal star, Sadio Mane headed in the third from Salah’s cross on the half hour mark.

Pep Guardiola’s side dominated the second half, after Salah went off injured, but could not pull a goal back to give them hope ahead of next Tuesday’s second leg at the Etihad Stadium.

In the other Champions League quarter-final first leg clash, Barcelona put four goals past Roma, but the visitors were able to get one as consolation.

Luiz Suarez thought he had put Barca ahead 7 minutes into the game but he was ruled offside, before an own goal by Daniele de Rossi gave Barca the lead on 37 minutes.

Kostas Manolas bundled another into his own net after the break before Gerard Pique tapped in Barcelona’s third.

Edin Dzeko then gave Roma hope when he pulled one back for the visitors, but Suarez made it four for Barca three minutes to time.

The return legs of both fixtures will take place on Tuesday. While City will host Liverpool in Manchester, Roma will welcome Barca to Italy.