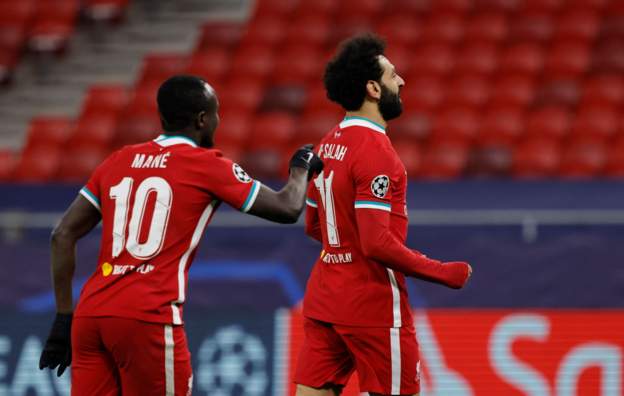 African duo of Mohamed Salah and Sadio Mane have responded to questions concerning their future at Premier League side Liverpool.

Both players helped their club finish second in the league this season, standing just one point behind champions Manchester City.

The duo also helped the team clinch the English FA Cup and the Carabao Cup, and are on the verge of winning the Champions League as they look to beat Real Madrid in the final on Saturday.

Salah, whose contract ends in June 2023 talks, have been in talks with the club for months over a new contract, and has finally put to rest speculations of him leaving Anfield by saying he would remain with the club next season “for sure.”

When asked about his future before Saturday’s Champions League final, he said: “I don’t want to talk about that.

“I just want to see Hendo [Jordan Henderson] with the trophy.”

The 29-year-old Egypt striker added: “I don’t focus on the contract at the moment. I don’t want to be selfish.

“I am staying next season for sure.”

On Mane’s end, he said he would decide on his future after the Champions League final against Real Madrid this weekend.

The Senegal international, who has scored 120 goals in 268 games for the Reds, will also enter the last 12 months of his contract from June.

Meanwhile, Liverpool boss Jurgen Klopp has dismissed suggestions the outcome of Saturday’s game will be a factor in whether some players decide to extend their contracts or not.

“What, if we win it they want to go? We are in talks with all the players, it is just not the moment to talk about the results of these talks. None of them are sitting there not knowing what we are planning.

“We have known each other for ages.”

Liverpool will play against Real Madrid in Paris. Kickofd time is 8:00p.m.