Home » Sports » Chukwueze out of Flying Eagles squad to U-20 World Cup, may play at AFCON 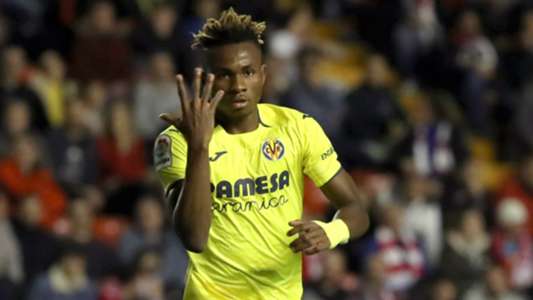 Nigerian wizkid and Villarreal winger, Samuel Chukwueze will not join Nigeria’s Flying Eagles at the 2019 FIFA U-20 World Cup in Poland, the team’s media office has confirmed.

There has been clamour in some quarters that the 19-year-old forward should rather represent Nigeria at the Africa Cup of Nations (AFCON) in Egypt, as Villarreal insists the kid would only be allowed to take part in only one competition.

He was initially among the overseas-based players listed for the Poland competition by under-20 team’s head coach, Paul Aigbogun.

Chukwueze made his Super Eagles debut last year and was impressive in that international friendly match against the Cranes of Uganda.

Super Eagles head coach Gernot Rohr stated earlier this week that he was still in a dilemma on whether to include the youngster in his AFCON squad or allow him feature at the U-20 World Cup.

But Media Officer of the Flying Eagles, Andrew Randa has put the matter to rest by stating Chukwueze won’t be part of the squad to Poland.

“Point of correction. Chukwueze specifically requested to be invited for the U20’s. He wasn’t in the mix originally. I can also confirm to you that he won’t be in Poland. Cheers,” Randa stated in response to a follower on his Twitter handle – CSN pointed.

The U-20 FIFA World Cup will start later this month in Poland, while the AFCON is billed to kick off on June 21st.

Chukwueze has enjoyed an impressive debut season with Villarreal since breaking into the club’s first team.

He has scored eight goals in 37 appearances across all competitions.