Former Cameroon international, Samuel Eto’o is currently facing a paternity lawsuit over a 19-year-old girl he allegedly fathered while playing on loan for Leganes in Spain.

According to a report on Daily Mail, one 39-year-old Adileusa do Rosario Neves is fighting to have Eto’o recognised as the father of her daughter, Erika.

Adileusa says she fell pregnant after meeting Eto’o in a nightclub in Madrid in 1997.

She claims Eto’o told her he would ‘act responsibly’ soon after she broke the news but then cut off all contact with her.

The hearing of the case has been confirmed to take place at a Madrid court on April 24.

Recalling the footballers response after getting pregnant, Adileusa said: “He (Eto’o) told me I was like all the whores who go looking for footballers, that I was a bitch and if I didn’t have an abortion I was going to have problems.

“I thought he was in love with me and believed he would behave better than that.”

Former Chelsea and Everton star, Eto’o currently plays in the Qatar Stars League with Qatar SC as he nears the end of his playing career.

It is reported that the 37-year-old has six known children with four different women, including his wife Georgette.

The alleged daughter, Erika said in an interview, published in Spanish newspaper ABC, that she is willing to reunite with her father.

“I’d love to have a relationship with him, especially so I could get to know my siblings, but I’m scared of being rejected,” she said. 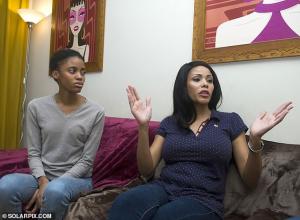 Erika and her mum