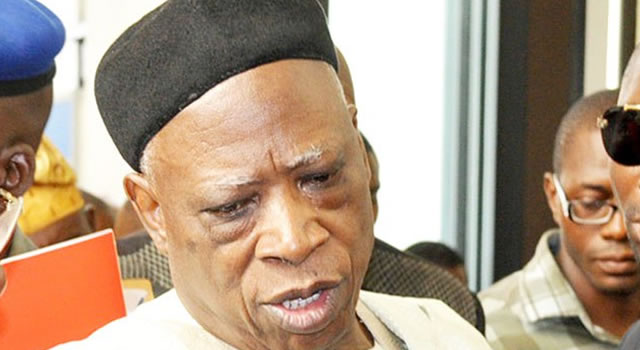 Senator Shehu Sani from Kaduna state has alleged that a monkey swallowed N70 million from the farm of a senator, Abdullahi Adamu.

Adamu was sacked on Wednesday as chairman of the forum, over claims that he siphoned money of the forum.

Senators of northern extraction, on Wednesday, announced the sack of Sen Adamu as chairman of their forum. In his place, the Northern Senators’ Forum (NSF), announced the appointment of Senator Aliyu Wammako, former governor of Sokoto State.

Members of the forum, in a letter addressed to the Senate President, Bukola Saraki, but read by the Deputy President of the Senate, Ike Ekweremadu, who presided, claimed that Adamu was sacked over mismanagement of funds of the forum.

“We announce his replacement with Senator Aliyu Wamakko immediately. Find the attached names and signatories of members.”

Adamu who was the arrowhead of the group of 10 senators that briefed journalists last week Wednesday, as soon as the Senate adopted the election sequence, kicked against the move.

He specifically described the report as rash and rushed. He argued that an issue as sensitive as that ought have been debated before it was hurriedly passed by both chambers of the National Assembly.

Briefing newsmen after plenary, Senator Shehu Sani, who spoke on behalf of northern senators, further explained why Adamu was removed. He said the lawmaker mismanaged N70 million left in his care as chairman of the NSF.

Sani, making a sarcastic statement, said monkeys invaded the farm of executive members of NSF and carted away the N70 million.

He said the said amount was handed over to Adamu by the forum’s leadership of the 7th Senate. Sani claimed that northern lawmakers, not satisfied with the handling of the funds, decided to replace Adamu with Wammako.

Sani said: “Abdullahi Adamu is a respected senator and an elder statesman. There are some things that some of my colleagues cannot say, but I am not used to holding back what is the truth. When we resumed as senators, Ahmad Lawan tendered the sum of N70 million to the 8th Senate.

“That is, that N70 million was the money gathered by northern senators from the 7th Senate. So it was handed over to the 8th senators from northern Nigeria.

“The rumours going round whether it is true or not, I do not know. But I believe most of the senators know it is the fact there were allegations that some monkeys raided the farm house of some of the executives in northern senators forum and carted away some of these monies.

“I think this country is becoming a huge joke, first of all it was the rodent that drove away the president and we now have snakes consuming about N36 million, and you now you have monkeys.”

Buhari, his loyalists with ‘philosophies of Stone Age native doctors’ made mockery of Tinubu –APC chieftain