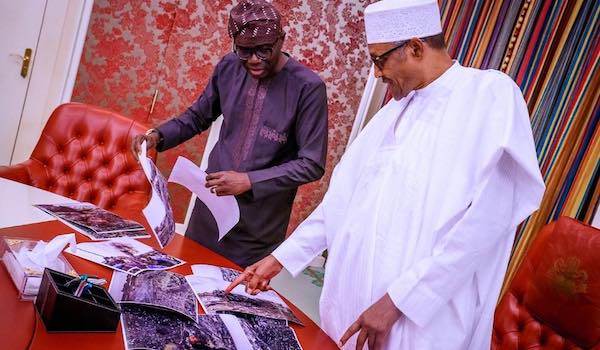 Lagos State Governor, Babajide Sanwo-Olu, on Monday, briefed President Muhammadu Buhari on the unfortunate the pipeline explosion that killed about 20 persons and injured several others in the Abule Ado area of the state on Sunday.

The governor held talks with President Buhari shortly after the Progressives Governors’ Forum (PGF) met with the President at the Presidential Villa, Abuja.

He told State House correspondents that the explosion and its attendant destruction was not anyone could have imagined.

Sanwo-Olu said a probe panel has been inaugurated by the state government to investigate the remote cause of the explosion.

He said: “I had a very rare opportunity to brief Mr. President about the very unfortunate gas pipeline explosion in Lagos State yesterday (Sunday).

The governor dismissed reports that the community was close to pipeline and a gas plant was cited in the affected community.

Sanwo-Olu added: “That is being speculative and that is what the committee set up by the government will find out. The experts are doing it and they will give us the full report in less than two weeks.

“There is a pipeline right of way and it was not the state government that gave that, it has been in existence since. So the issues around the fact that there were commercial gas cylinders around the vicinity are all still very speculative.

“The experts will be able to tell as what led to this incident and the lessons we all need to take away from it.”