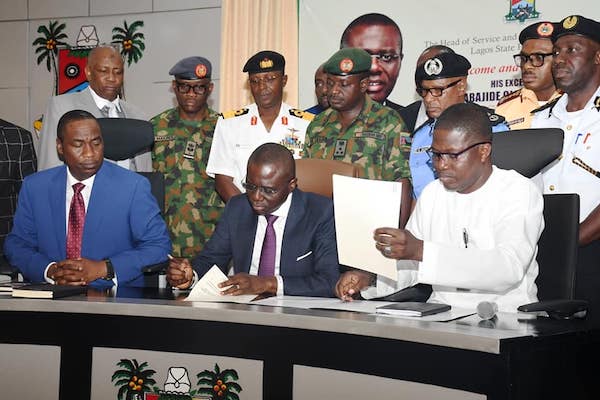 Governor Babajide Sanwo-Olu has declared a state of emergency on environmental sanitation and traffic management in Lagos state.

The governor made this known while signing his first executive order of refuse management, traffic management and public works on Thursday at Lagos House, Alausa, Ikeja.

According to the governor, the development will begin the process of restoring a better culture in which all citizens will be involved in moving the state forward.

“As from the date of this order, there shall be zero tolerance for environmental abuse, including illegal and indiscriminate dumping of refuse, construction on drainage points and setbacks,” he said.

Going forward, he said all LASTMA officials shall effectively carry out their functions by ensuring strict enforcement and compliance with all extant traffic rules and regulations.

He added that LASTMA officials would immediately begin work on a shift basis in which road and traffic management operations would be on till 11 pm on a daily basis.

On roads, the governor explained that the Lagos State Public Works Corporation would immediately commence the identification and repairs of all potholes and bad roads within the state.

He also said provisions of the order would extend to all enforcement agencies in the state, in maintaining law and order for the collective good of the citizens.

“I expect the fullest level of compliance with this order and will look to the various heads of ministries, departments and agencies to give full force and effect to the orders therein contained and to take responsibility for any failure,” he said.