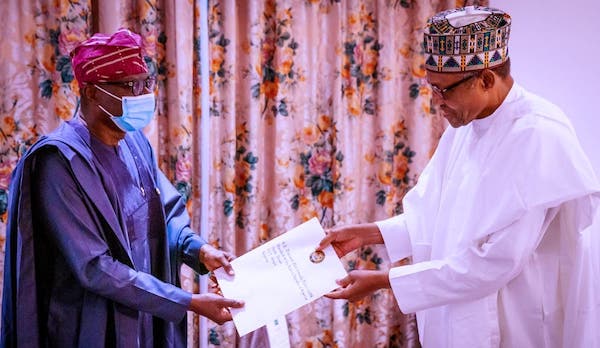 Lagos State Governor, Babajide Sanwo-Olu, on Tuesday met with President Muhammadu Buhari on the ongoing #ENDSARS protests in various parts of the country.

During the meeting held at the Presidential Villa, Abuja, the governor presented a copy of the demands made by youths protesting the now-disbanded Special Anti-Robbery Squad’s brutality and extortion in the country.

He told State House correspondents at the end of the meeting that the president restated his commitment to a holistic reform of the entire police force.

Sanwo-Olu said: “The essence of the meeting is to pass on the clarion call of all our youths that are protesting in different parts of the country on the ENDSARS NOW. Mr. President graciously accepted the letter that was given to me by the youths to personally deliver to him. He graciously received the letter and we went through it very very briefly. I explained to him all the things that we are doing.

“I can tell you and all our youths out there that Mr. President has listened, your letter is documented, it has received attention and he has assured me that all of the things that you have said there he will see how he will begin to implement them almost immediately.”

Officers from disbanded SARS summoned to Abuja for psychological test