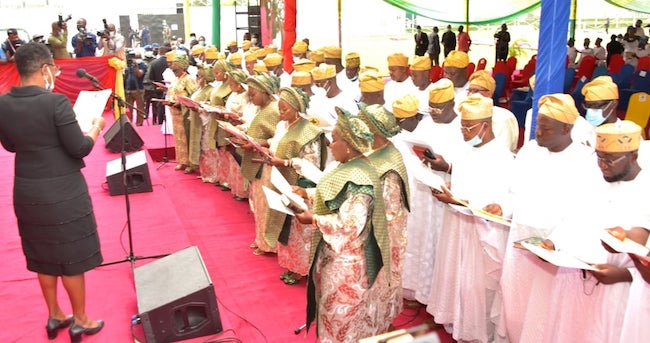 The Lagos State Governor, Babajide Sanwo-Olu, on Tuesday sworn-in the 57 newly elected chairmen and vice chairmen in the state.

The local council chiefs were elected in last Saturday’s election in the 20 Local Government Areas (LGAs) and 37 Local Council Development Authorities (LCDAs) in the state.

The governor, who addressed the council chiefs during the ceremony held at Lagos House, Ikeja, urged them to always put the people of the state first in all that they do because they were elected to serve the people.

Sanwo-Olu said that the new council chiefs have a responsibility to ensure that they do not let the people down in any way or form.

He stressed that the only way they can reciprocate the people’s trust is to give their best and ensure that the welfare and wellbeing of the residents take precedence in all their decisions.

The governor said: “Right from your first day in office, I implore you to start thinking about the kind of legacy you would like to leave behind when your tenure ends.

“As we all know, public office is a position of trust that no one holds forever – we hold it for a time and then we pass on the baton to others.

“Let me use this opportunity to emphasise the need for continuity and progress in governance. I urge you all to ensure that you build on the good legacies laid by your predecessors.

“Also, ensure that you surpass the legacies and the expectations of the people who have very enthusiastically elected you.”

He said this was not the time to alienate some people because of political differences, but time to make all citizens feel the impacts of good governance.