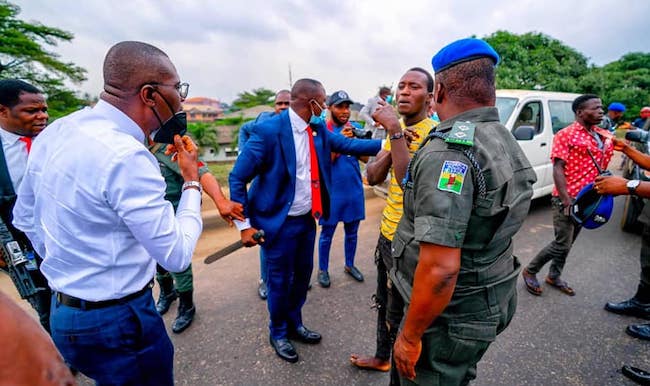 The security details attached to the Lagos State Governor, Babajide Sanwo-Olu, on Monday morning arrested some suspected criminals who specialise in attacking motorists and other road users in the Ojota area of the state.

The suspects were arrested while attempting to rob a motorist at Ojota inward the State Secretariat in Alausa, Ikeja, Lagos.

The machete-wielding criminals mild round the motorist and were trying to drag him out of his vehicle when the governor’s convoy arrived at the scene and rescued the victim.

They immediately swooped on the suspects and retrieved the dangerous weapons from them.

The suspects were later taken away in handcuffs.

Sanwo-Olu, who addressed Lagosians at the scene, said the arrest of the suspects would send a strong warning signal to other criminals that there is no hiding place for them in the state.

Related Topics:#featuredSanwo-Olutraffic robbers in Lagos
Up Next