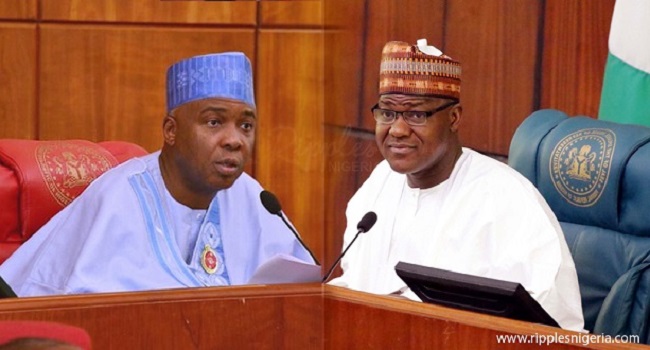 As the 8th National Assembly is gradually rounding off, President Muhammadu Buhari has said the Senate President Bukola Saraki and the Speaker of the House of Representatives, Yakubu Dogara are not patriotic enough in their service to Nigeria.

Buhari who spoke on Monday during an interview programme on NTA, said his evaluations of the performances of the duo that piloted the affairs of the 8th National Assembly was low on patriotism.

He said the outgoing leaders of the federal legislature were bent on dictating terms for the executive which is not good in a democratic setting.

He said, “The National Assembly wanted to dictate the terms, which is wrong. It is the executive that should dictate the terms and present them before the legislature which would then examine them.

“But when they go round posing as the leaders (who should dictate terms) and not the executive, then that’s a problem. Personally, I spoke to the Senate President, Saraki, and Dogara.”

Read also: BUHARI ON ANTI-CORRUPTION: Those who call me ‘Baba go slow’ will know the real me in the Next Level

Meanwhile on security, President Buhari had said police had not done enough to help the situation of the country. He also blamed the insecurity in the country on community leaders who are supposed to work hand in hand with the police.

He said, “Those who are committing atrocities against communities, against the state and the country came from somewhere in Nigeria. Their neighbours know them, and we have politicians and rulers; the police are in the front line. We have the police in every major town and city in this country and I said they were not given the uniform and rifles to impress anybody, but to secure the people. I think the community leadership and the police have failed this country.”

He, however, vowed not to cease in his efforts to rid the country of different security challenges besieging it.