Saraki ‘thinks he owns the Senate’, I regret supporting his emergence— Ndume 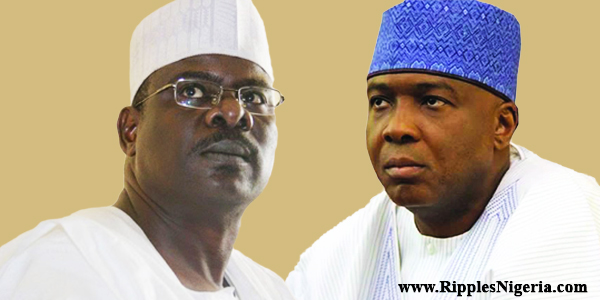 The lawmaker accused Saraki of targeting those who oppose him.

In March 2017, the lawmaker was suspended for “embarrassing” Saraki and Dino Melaye, the senator representing Kogi West.

Ndume had demanded that the senate investigate the allegation that a vehicle imported without appropriate customs documents belonged to Saraki while he also moved for a probe into the allegations of certificate forgery levelled against Melaye.

Speaking on Hard Copy, a Channels Television programme, Ndume, responding to a question from Maupe Ogun, the presenter, who asked the senator If he regrets supporting the senate president, he said, “Yes, I do. Look at the senate now, we have been reduced to unbearable level of integrity, just because of few people, few person, that is wrong.

“I don’t want to be individualistic about it. We put the leadership there for Saraki; if you want me to be specific about it, and then it turns out to be another thing. We have senator’s president now, instead of senate president.”

Ndume said his relationship with Saraki became strained because of his love for the truth.

Read Also: Buhari’s govt still focused on how to assassinate me –Gov Wike

He maintained that he has a cordial relationship with his colleagues at the upper legislative chamber.

“I speak the truth a lot even if I’m alone, and I stand by it. We started with the issue of Magu, I was with you on national TV and that is history now, then we came out and the second issue was that of the car importation, and the issue of Dino Melaye’s certificate and then I was shockingly suspended for 180 days and it was not the committee that recommended that,” he said.

“My colleagues did not not know about the report that was used to suspend me illegally and unconstitutionally for 180 days. That’s why I went quietly to court and you see the response of my people then.

“It is not fair for one among equal to take himself up, and use, take advantage of the gavel to rule instead of to lead, instead of to preside, that is what the constitution says. The senate president is to preside, he doesn’t even have a vote, he has no voice. By the time you accept being the senate president, you have lost your right to some extent as a senator until the senate ties, that is when you come in to break the ties. This is not the case, as senate president will say, ‘I direct so so so and my members…’.

“I mean, it’s very unfortunate, I personally did not expect this. That is how we got it wrong, because once an individual thinks he owns the senate, and he dishes out the direction, and dishes out what he thinks, you’ll always get it wrong… 108 heads are better than one. But for now, senate at certain point is like Dino and Saraki. It is very unfortunate.”