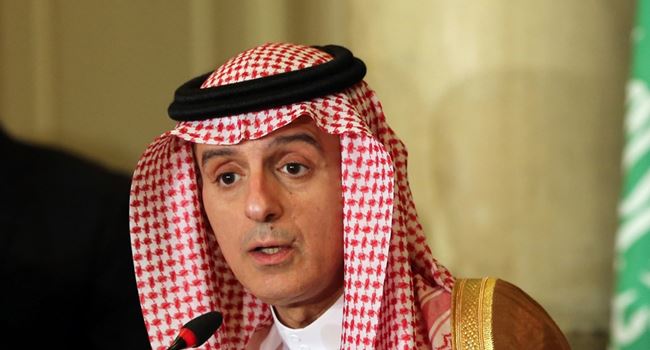 The government of Saudi Arabia has declared that it will consider all options in its response to an attack on its oil facilities, including a military one.

According to Saudi Minister of State for Foreign Affairs Adel al-Jubeir, the oil rich country will take full action, once a probe into who was really responsible for the attacks is completed.

Al-Jubeir added that Saudi Arabia believes Iran was behind the attacks, but added that the United Nations was helping it identify the launch site of missiles and drones.

“We want to mobilise international support and we want to look at all options – diplomatic options, economic options and military options – and then make the decision,” he said.

He added expects the international investigation into who was responsible for the attack to be completed “fairly soon”.

READ ALSO: ALGERIA: 8 infants burnt to death after fire sweeps through maternity unit of a hospital

“We want to avoid war but at the same time we have to signal to the Iranians that ‘your behaviour cannot continue’,” said al-Jubeir.

The comments by the Saudi minister comes a day after leaders from the United Kingdom, France and Germany jointly blamed Iran for the drone attacks on two oil facilities in the Abqaiq and Khurais areas Saudi Arabia.

The leaders of the three countries, (all signatories to the Iran nuclear deal) issued a joint statement on Monday, on the sidelines of the annual United Nations gathering of world leaders, to coordinate their strategy on Iran.

British Prime Minister Boris Johnson who hinted that the UK may withdraw from the 2015 agreement, met with French President Emmanuel Macron and German Chancellor Angela Merkel at the annual United Nations gathering.