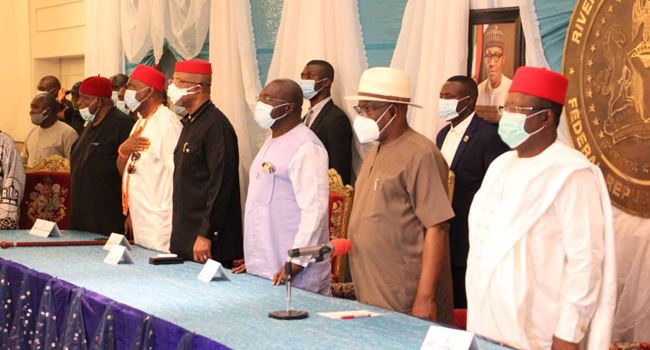 Governor from the South-East region of the country have said claims that Igbos were being killed in Oyigbo, Rivers State, were not true.

They also accused the Indigenous People of Biafra (IPOB) led by Nnamdi Kanu of trying to cause another civil war in Nigeria and cautioned people of the region, mainly those who own and run businesses to be careful of the proscribed group.

A statement by Kelvin Ebiri, Special Assistant (Media) to Governor Nyesome Wike of River State said Chairman of the South East Governors Forum and Governor of Ebonyi State, Dave Umahi, stated this during a meeting with Wike at the Rivers State Government House, Port Harcourt, on Sunday.

They were not the only Igbo leaders at the meeting as Ohanaeze Ndigbo president-general, Chief John Nnia Nwodo, also led other prominent members of the socio-cultural group to the meeting.

The meeting was convened following claims that Igbos were being killed in Oyigbo, Rivers State by security operatives under the directive of Wike.

Reports had claimed that Wike gave the directive following the bloodletting allegedly committed by IPOB members during the #EndSARS protests crisis.

But Ebiri quoted Umahi, as saying they were in Rivers to establish the truth of the matter, told newsmen that they have discovered that the claims that Igbos were being killed in Rivers were not true.

According to statement, Umahi said with what Wike told them concerning the atrocious activities of IPOB in Oyigbo leading to the imposition of curfew in the entire local government, it was now more needful that Ndigbo distanced themselves from IPOB.

Umahi said they could not imagine how IPOB could go to Benue and Rivers State to hoist its flag and claim the territories belong to the Igbo people.

Reiterating that Igbo leadership were opposed to IPOB stance, the Enugu State governor said he had huge investment in Rivers and called on Ndigbo living in the state to respect the state government and do their business peacefully.

Nwodo, who had recently described the reports of killing of Igbos in Oyigbo as a threat to South-East relationship with Rivers and the entire South-South, said the meeting had reinforced the affinity between Igbos and the people of Niger Delta.

He said that Wike remained a champion of restructuring of Nigeria.

Nwodo vowed that the Igbo leadership would fold their alms and watch some misguided few, who knew nothing about how brutal and devastating the last civil war was, keep fanning the ember of disunity.

Meanwhile, Wike told the Igbo leaders during the visit:

“Tell your people, Rivers people will continue to live together with Igbos. Don’t allow your sons to tell you lies. Igbos are innovative and hardworking. There can’t be Nigeria without Igbos. Nobody should take them for granted. But that doesn’t mean you must allow criminals to spoil your name.

“If I hate Igbos, I won’t appoint your son into my state cabinet two times. But you have to obey rules. Don’t allow criminals to dictate to you”.

He stated that every governor desires peace to govern and Governor Wike is no exception. He stressed that the people of the State endorse every measure taken by Governor Wike to ensure lasting peace in the State.

Related Topics:ipobNdigboSouth-East governors
Up Next

MURIC warns against any invitation to join fresh #EndSARS protest