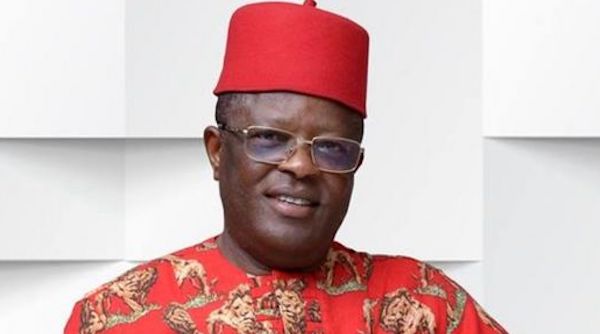 Ebonyi State Governor, David Umahi has on Saturday called on secession agitators in the South-East region of the country to reason with the leaders about their grievances.

Umahi, who also serves as the leader of the Governors Forum in the zone, says he is certain that whatever grievances the agitators have, they can be addressed within six months.

The Governor said this in Abakiliki during the conclusion of an eight-day fast organized by the state chapter of the Christian Association of Nigeria (CAN) over the worsening security situation across the country.

Umahi declared his belief in a united Nigeria and condemned calls for secession by some groups in the country.

He said he believed in a country where oneness, freedom, equity, justice, fairness among other virtues prevailed.

“I do not believe in second-class citizenship where a section of the country is being seen to be superior to others,” said Umahi

“We are all created by God and no one should talk of disintegrating the country.”

On the several groups seeking disintegration, including the Indigenous People of Biafra (IPOB) and the agitators for the actualization of Yoruba Nation, Umahi admitted that the groups’ agitations were genuine.

In his words: “I want Igbos to submit these agitations and I would lead the governors and leaders of the zone to the centre to address these grievances.

“The groups can then do what they like if after six months, we fail to address these grievances.”

He added: “We would tell the authorities in Abuja that our people are aggrieved but such cannot be addressed by insulting the president, governors and leaders from other regions of the country.”

Ortom is not someone I take serious, he attacks FG to distract us from his failures —El’rufai