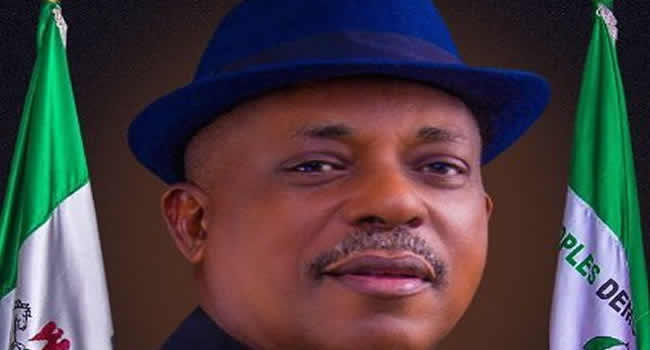 The National Chairman of the Peoples Democratic Party (PDP) Uche Secondus, has warned that the country risks implosion if the current insecurity persists.

Secondus also stated that the upcoming 2023 elections may not hold as a result of this menace.

The PDP Chairman stated this on Thursday at the Emergency meeting of the party’s National Executive Committee (NEC) at the Wadata Plaza in Abuja.

In his suggestion, Secondus implored the Federal Government to convene a National Security Conference to tackle the various issues bedeviling the polity.

He said, “Our country today is grounded by insecurity and there has been no matching response from government despite the demands of the 1999 operating constitution in section 14 subsection (2b) that “the welfare and security of the citizens shall be the primary purpose of government”.

“Terrorists in the North before were confided to the North East region but today 50 villages have been reportedly taken by them in the North Central state of Niger.

“Where they are now, we hear is about two hours drive away from Abuja. Herdsmen are also menacing in the West, Gunmen causing havoc in the East, and the militants in the South all killing, looting, raping, maiming, and burning down homes. The situation is bad, Nigerians all over are living in fear.

“Clearly, anarchy is being let loose on the people with the government unable to provide any resistance. We have therefore invited you to enable the party as the main opposition in the country to add its voice to the worrisome situation with a view to saving not just democracy but even the country.

“Having shown clearly its incapacity, the APC led-government has swallowed its pride and now invited the international community to come and help out. This ought to have been done long ago instead of pretending and spilling innocent blood.

“For us as opposition, any sacrifice to stop the endless bloodletting of innocent citizens should be activated including but not limited to an immediate convocation of National Conference on security for comprehensive and all-embracing deliberation on the future of this country.

“This has become necessary as nothing, not even 2023 is realistic if security issues are not adequately addressed.”

Related Topics:#featured2023insecurityPDPUche Secondus
Up Next

Father Mbaka withdraws support for Buhari, wants president to resign or be impeached over growing insecurity