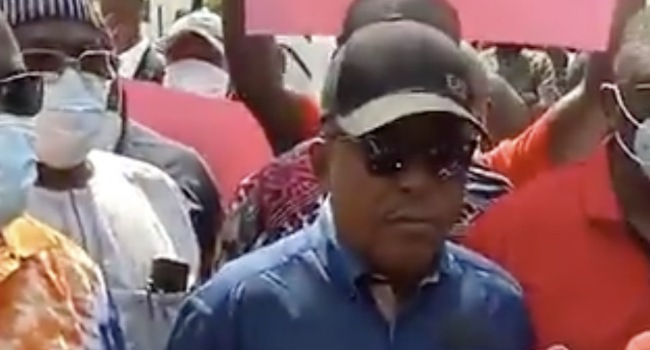 National chairman of the Peoples Democratic Party (PDP) Uche Secondus on Thursday led other members of the party to stage a peaceful protest in Abuja over the kidnap of of some students in Katsina.

Secondus, joined hundreds of women and youths who were protesting the abduction of over 300 students of the Government Science Secondary School, Kankara, Kankara Local Government Area of Katsina State.

The protesting women and youths were demanding for the immediate and safe rescue of students abducted last week.

The protesters had stormed the Presidential campaign headquarters of the PDP in Maitama, Abuja, displaying various placards bearing such inscriptions as “Buhari has failed,” “Buhari, bring back our boys,” “Buhari values his cows more than human lives,” among others.

According to them, the time had come for the President to throw in the towel, saying his inability to secure the nation is now glaring for all to see.

Standing in solidarity with the protesting women and youths, noted that the situation in the country had become too dangerous for silence even as he called on the President to immediately bring the abducted students back and unhurt.

Reps want Buhari impeached over kidnap of Katsina students, others