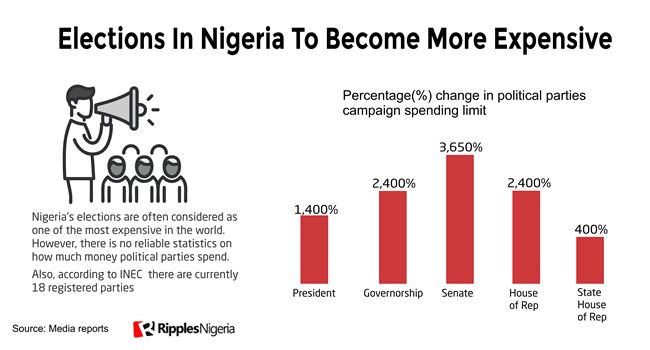 Nigerian elections are among the most expensive in the world, and they may become much more so in the coming years.

According to reports, the National Assembly is set to pass the electoral amendment bill that will see campaign spending limits for political position increase by over 1000 percent.

The development is even more surprising when you consider that in Tanzania a candidate did not need to print his name on any items to woo voters.

In several media reports, a principal officer of the National Assembly was quoted as saying: “We took cognisance of the fact that N1 billion campaign fund limit is no longer realistic. The same thing applies to other candidates at other levels. We are being realistic with the new campaign cash ceilings.

“And the reality is that most candidates in the past breached the provision of Section 88 without sanctions. We have to come to terms with reasonable thresholds.”

Aside from concerns about politicians recouping campaign expenditures once in office, Ripples Nigeria sought to see what the planned expenditure could do for Nigerians.

What the proposed campaign funds might achieve for Nigerians if they were redirected.

The proposed N15 billion earmarked for presidential campaign financing can assist in building 750 more effective primary health care facilities to supplement the country’s existing centers, at a cost of N20 million each.

On the other hand, it could also be used to build 1,500 three-block classrooms around the country for N10 million apiece.

In other sectors, the N15 billion proposed cap for presidential election could have an impact on:

Jobs: The expenditure during election if rechanneled could provide about 20,833 jobs to unemployed Nigerian youths and cater for their 2-year take-home pay at N30,000 minimum wage per person.

Water supply: The said sum could also be used to construct 25,000 boreholes at ₦600,000 each across the country. The boreholes would have helped to an extent in Nigeria’s cholera challenge.

Electricity: the presidential campaign fund could have also provided 150 megawatts of solar energy to the national grid at a cost of N100 million per megawatt, enough to power 150,000 houses at a rate of 1MW per home.

Roads: About 53 km of road networks could also be constructed at N283 million per km according to World Bank’s estimate.