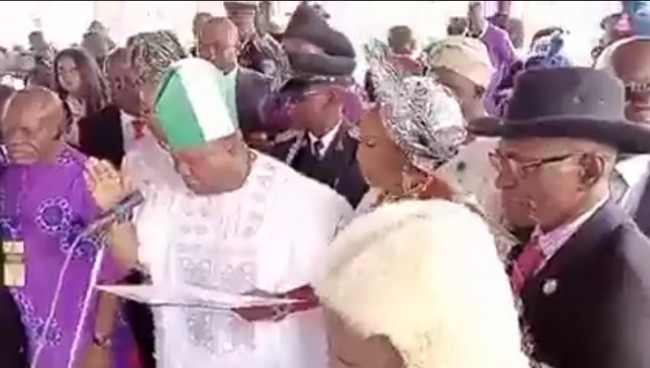 Senator Ademola Adeleke, on Sunday took the oath of office as he officially takes over as the Governor of Osun State.

The oath of office was administered on him by the State Chief Judge, Justice Oyebola Adepele-Ojo.

﻿
The new governor took the oath alongside his deputy, Kola Adewusi.

Read also:OSUN: Oyetola hopeful of return as Adeleke set to take over today

The Wife of the PDP presidential candidate, Titi Atiku, Oluwo of Iwo, Oba Abdulrasheed Akanbi, and former Oyo governor, Chief Rashidi Ladoja, among others, were also in attendance.

However, the former Governor Adegboyega Oyetola had earlier in his handover notes expressed hope of reclaiming his victory at the elections petition tribunal.

He insisted that Adeleke’s tenure would be short-lived as he would eventually be declared the winner by the tribunal.

Related Topics:#featured‎INECSen Adeleke
Up Next