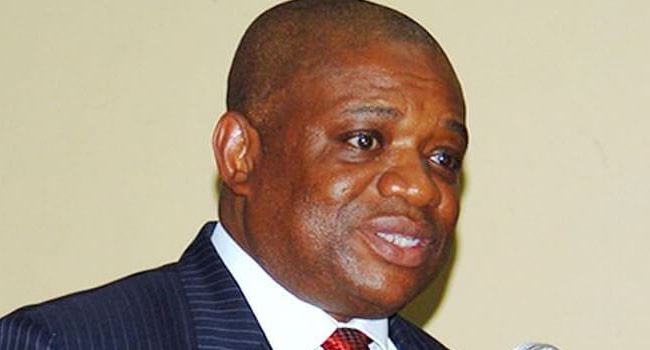 Former Abia State governor, Dr. Orji Uzor Kalu, on Tuesday said he never stole N7.2 billion as the governor of the state between 1999 and 2007.

He stated that during his tenure, Abia State had no such fund.

Kalu made the denial while continuing his testimony before Justice Mohammed Idris of a Federal High Court in Lagos to prove his innocence of the allegation level against him by the Economic and Financial Crimes Commission (EFCC).

The former governor, while responding to a question from his lawyer, Prof. Awa Kalu (SAN) during cross examination, said that there was no way he could have stolen what was not in existence.

“The monthly allocation of Abia State when I took over in June 1999 was N168 million. It was averaging between N168 million and N172 million monthly. The first month that I came in, there was even no money to buy diesel. I spent my own money to run the state for six months.

“The highest money I got as governor came from 2004 when we had about N1 billion and from that time up till May 2007 before I left, what we had was N1.6 billion.

“Throughout my stay in office, I never owed salary and pension. When I took over as governor and before I left, we moved it up to N500 million. It was from this that we were able to do a lot of things”.

Speaking on his line of businesses before he began his political journey, he said: “I was running a group of companies under Slok Nigeria Ltd and I have a big furniture factory in Maiduguri. I was also trading in cows. The cows were coming from Chad to Umuahia. I also had a veritable oil factory in Aba supplying to people in Kano and Maiduguri.

“I was also into shipping activities with major oil companies. We also have a very big corn farm in the East and Bauchi.

“We were a major shareholder before another shareholder bought off First Bank. In 1994, the then Hallmark Bank had a problem and I later bought majority stake in the bank. We also had major interests in Banks in DRC, Gambia, Sieria-leone, Liberia and the then Sudan before crisis set in”.

The former governor also disclosed that he also deals in buying and selling of property.

He added that he made all his statements to the EFCC under bad treatment from some police officers.

“When I learnt they were looking for me, I called Ibrahim Lamorde that I was in the United States and that I would show up upon my return to the country.

“But when I returned to Nigeria, they were waiting for me at the airport and whisked me away to their office. After I was beaten up thoroughly by police officers, I asked them what was my offence and they told me I had been insulting (then) President (Olusegun) Obasanjo. Mallam Nuhu Ribadu and Ibrahim Lamorde later came to apologise to me”.