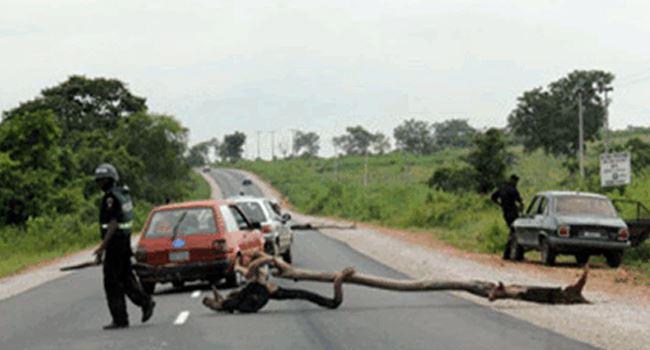 The Senate has appealed to the Inspector-General of Police, Mohammed Abubakar Adamu, to as a matter of urgency reduce the number of checkpoints on Federal Highways in the country.

This, according to the Senate, has become necessary to reduce the gridlock on the roads.

The upper chamber also urged Adamu to direct officers of the Police Force to eschew all forms of extortion on motorists as alleged, while carrying out stop and search to establish validity of vehicle particulars.

The resolutions were reached following the consideration of a motion brought to the floor by Senator Chukwuka Utazi (PDP, Enugu North).

Utazi, coming under order 42 and 52 of the Senate standing rules, in his motion titled “National Security versus Disproportionate Road Checkpoints on Federal highways in the country”, said that the National Security architecture of Nigeria has been stretched beyond its elastic limits.

According to him, acts of criminalities have put untold pressure on the country’s national security architecture, necessitating and compelling security agencies to confront security breaches headlong.

Utazi noted that as a consequence, the imposition of road checkpoints on almost all federal highways in all geo-political zones of Nigeria.

The lawmaker stated that while road blocks are necessary to curb criminal activities, its abuse for unintended purpose is reprehensible.

He stated that the Senate “will not renege in our responsibilities when the masses of this country complain that government police meant to protect them has been turned into an oppressive conduct by those concerned and which the IGP and people of his ilk may not be aware.”

Meanwhile, the Senate has referred President Muhammadu Buhari’s request for the confirmation of the appointment of the Chairman and Members of the National Hajj Commission to its Committee on Foreign Affairs.

The Senate President, Ahmad Lawan, referred the request to the committee shortly after the commencement of plenary on Thursday.