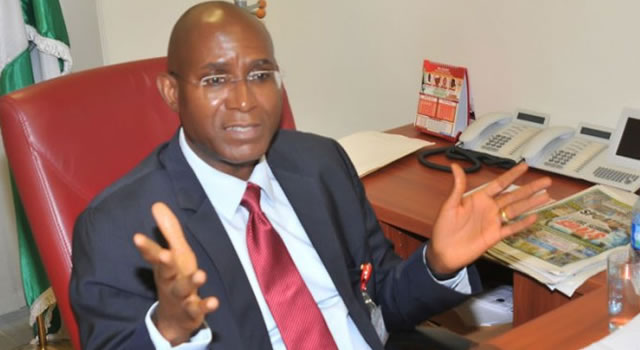 This translates to six months, following the adoption of a report of the committee on Ethics, Privileges and Public Petitions. The committee is headed by Senator Samuel Anyanwu.

The committee had earlier recommended in its report that the embattled senator be suspended for one year.

The sentence was reduced, following the intervention of the President of the Senate, Bukola Saraki and three All Progressives Congress (APC) senators. The senators are Ahmad Lawan, Bala Ibn Na’Allah and Kabiru Marafa.

The lawmaker was suspended for alleging during a press conference, that the Senate amended the 2010 Electoral Amendment to frustrate President Muhammadu Buhari’s re-election bid. He was also suspended for dragging the Senate before a Federal High Court.

Omo-Agege was present when the Senate announced his suspension. He was led out of the chamber by members of the Parliamentary Support Group for President Muhammadu Buhari, chaired by Abdullahi Adamu.

Beside the suspension handed down to Omo-Agege, the Senate has also disbanded the various groups in the Red Chamber, with special emphasis on Buhari’s support group.

Trouble started when Anyanwu presented his committee’s report. He explained how Omo-Agege declined to make any comments when he summoned to appear before the panel.

He also criticised the lawmaker for dragging the Senate before a Federal High Court and recommended that “Omo-Agege be punished to serve as deterrent to others who abuse legislative processes.”

“Omo-Agege is a member of Ethics committee and he understands how the process works. When he appeared before us, he refused to respond to questions posed to him. He said since the case was already in court, he could no longer comment.

“We feel that this is a slight on the Senate and we need to stop practices like this. Our committee is recommending that Omo-Agege be suspended for 181 days for making false allegations against the Senate.

“Omo-Agege had admitted guilt on the floor of the Senate by apologising to the leadership and the entire Senate. The committee was surprised that he changed his mind and took the Senate President and the Senate to court.

“His action infuriated all the members of the committee who fired questions from all directions at him. When he was asked if his court action came before or after the matter was referred to the committee and whether a court action could stop the Senate from carrying out its responsibility, he kept mute.

“The committee is of the opinion that the action by Senator Ovie Omo-Agege of going to court after apologising to the Senate was totally unacceptable, especially as an experienced lawyer and member of the committee who is conversant with the modus operandi of same, and therefore, must be punished to serve as deterrent to others who might contemplate taking the Senate to court over its internal matters.

“Senator Ovie Omo-Agege be suspended for 181 legislative days from the date of this resolution is taken to serve as deterrent to other senators who might contemplate taking the Senate to court over its power to regulate or determine its internal matters,” Anyanwu said, reading from the report.

Saraki, in his remarks, said the existence of the controversial Pro-Buhari group, was a threat to the unity of the Senate. He said nobody supports Buhari as much as he does.