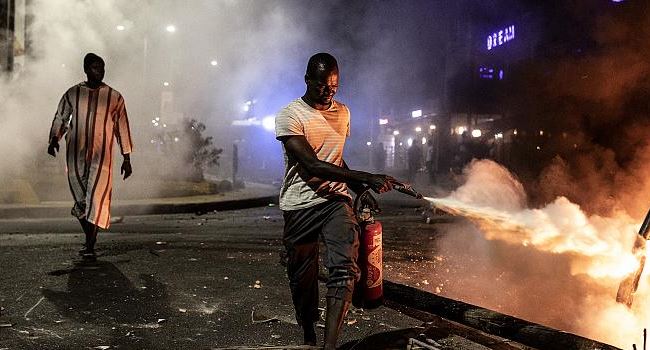 Youths in Senegal have taken to the streets to protest a new COVID-19 curfew which was imposed on the capital, Dakar, on Thursday, January 7, burning tyres and erecting barricades as police fired tear gas to disperse them.

Reports say there were overnight clashes in the Ngor district of the capital, while other incidents were reported in the Medina and Yoff areas and suburban Pikine, Guediawaye and Thiaroye.

Violence erupted on the first night of a 9 pm-5 am curfew announced by President Macky Sall for Dakar and the adjoining region of Thies.

The two cities jointly account for nearly 90 percent of Senegal’s Covid-19 cases, according to the West African country’s health authorities.

The government has continued to defend the curfew since it came into effect on Wednesday, saying the step was justified by “rampant growth in infections, severe cases and the number of deaths recorded.”

Senegal imposed a first curfew in March 2020, after the first cases of Covid-19 emerged, a measure that prompted violent demonstrations before it was lifted in June.

As in other African countries, Senegal’s coronavirus numbers are far from the levels reached in the West, with more than 20,000 cases and 433 deaths but the outbreak has put a strain on the country’s poor healthcare system, and restrictions have had a hefty impact on people in precarious jobs.

One of the leaders of the protesting youths, Jean-Paul Mendy, a delivery driver in the Parcelles Assainies district, said he had to do his job after nightfall because traffic was easier at that time.

“Lots of us work at night. We earn a living on a day-by-day basis,” Mendy said.

Modou Niang, a taxi driver in Parcelles Assainies, also said the curfew began just when he was supposed to start work.

“I have children and they’re stopping me from working. Macky Sall’s decision is nonsense; it looks like he thinks he’s king.”

Another protester, Babacar Seck, said the curfew was inconsistent with what was happening during the day as street markets remained open and people were still packed in public transport.

“The curfew isn’t going to make the virus go away. The markets are open in the day while people are still packed in public transport and public places. So why is the curfew at night?” Seck asked.