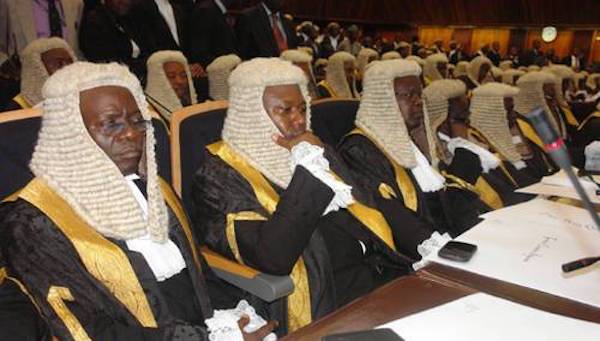 The Body of Senior Advocates of Nigeria (BoSAN) Thursday warned that if the truth behind the invasion of the Federal High Court in Abuja was not unravelled, Nigeria would lose respect and become an object of ridicule among the comity of Nations.

It was reported that operatives of the Department of State Services (DSS) had invaded the court in an attempt to arrest convener of the #RevolutionNow movement, Omoyele Sowore; but the service denied this report.

BoSAN therefore advised President Muhammadu Buhari to set up a Judicial Commission of Enquiry to reveal the identities of those who invaded courtroom number 7 of the Abuja court.

The body gave this advice at a special valedictory court session to mark the retirement of Justice Kumai Aka’ahs from the Supreme Court. The event was held at the headquarters of the Supreme Court in Abuja.

Onomigbo Okpoko SAN, while delivering a Speech noted that the incident with similar ones in the last three years points to the level of disregard to the rule of law and the judiciary.

“It will, however, go one step further to suggest that this matter should not be swept under the expanding carpet of deceit in Nigeria.

“The pertinent question is who was responsible for the action in the courtroom? This is a task that the government must carry out to ascertain the truth”, he said.

While stating that the Nigeria Police being a sister organisation cannot investigate the matter thoroughly, he said even the Nigerian Army, Nigerian Customs and other paramilitary forces in the country cannot also not do a thorough job.

Okpoko, SAN, added that even the National Assembly is not sufficiently equipped to investigate the matter.

“The way out is an Independent Commission of Enquiry under the law. This can be achieved. The Body of Senior Advocates hereby demands that Mr. President considers without delay, the setting up of a Judicial Commission of Enquiry to hear publicly and determined the perpetrators of the acts, their sponsors and their objectives.

“Unless this is done, Nigerians are unlikely to be convinced by any other explanations that the act was not the work of the DSS.

“It is the result of any such judiciary inquiry that will lead to the re-establishment of discipline in the society. The DSS and its officers are not above the laws of the land and the Constitution.

“In Nigerian law and in the Common Law, the Superior Orders is no defence to a criminal conduct. It has never been and this administration must not allow it to be”, the body said.

Also speaking at the occasion the NBA President, Paul Usoro SAN condemned the persistent disobedience and flouting of court orders by the authorities in the country.

“We desecrate the temple of justice when we blatantly flout and disobey the orders of courts. A court that is made to be helpless in the face of flagrant disobedience of its orders is as useless to society as a toothless bulldog is to its owner.

“No one fears a bulldog that is known to be toothless, it has no capacity to keep away a marauding army or a band of invaders”, he said.