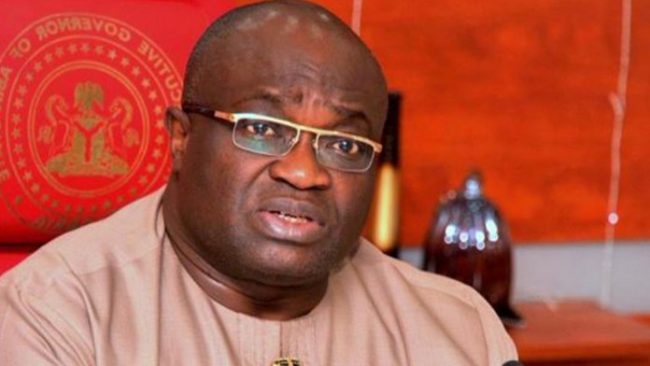 Socio-Economic Rights and Accountability Project (SERAP) has urged Governor Okezie Ikpeazu of Abia State to “immediately withdraw his appointment of Justice Obisike Orji as the acting Chief Judge of the state and restore Justice Theresa Uzokwe, who was removed by the State House of Assembly, back to her position as Chief Judge.”

The group described the removal of Uzokwe, and subsequent appointment of Orji as illegal.
The House of Assembly had on Friday passed a resolution suspending Justice Uzokwe as the state’s chief judge.

The speaker, Mr. Chikwendu Kalu, while reading the resolution, set up an 8-man ad-hoc committee to investigate allegations of misconduct against the judge, and mandated Governor Ikpeazu to appoint an acting chief judge pending the completion of the investigation by the committee.

But SERAP in a statement on Sunday by its deputy director Timothy Adewale said, “Rather than using their executive and legislative powers to promote good governance and abolish laws granting double emoluments and large severance benefits to former governors, the Abia State government is denigrating the judiciary and displaying contempt for the rule of law.”

According to SERAP, “The purported suspension of Justice Uzokwe violates sections 292(1)(a)(ii) and 21(d) Part 11 of the Third Schedule to the 1999 Constitution of Nigeria (as amended), and amounts to a blatant attack on the integrity and independence of the judiciary. No judge anywhere in Nigeria can be removed without the involvement of the National Judicial Council (NJC), no matter the level of allegations of misconduct against that judge.”

The organization said, “Governor Ikpeazu must rescind his illegal appointment of a new chief judge, and the Abia State House of Assembly must withdraw the apparently politically motivated suspension of Justice Uzokwe without further delay. Doing so will be entirely consistent with the decision of the Supreme Court of Nigeria in the case of Raliat Elelu-Habeed & anor v Attorney General of the Federation and Attorney General of Kwara State (2012).”

The organization said, “If allowed to stand, the suspension of Justice Uzokwe would set a bad example to other state governments, and dangerously move them toward executive and legislative dominance and control over the judiciary. Should Ikpeazu and the House fail to restore Justice Uzokwe back to her position, SERAP will undertake appropriate legal action including before the NJC and the UN special procedure mechanisms, to seek justice and effective remedies in this matter.”

The statement read in part: “The suspension also infringes the constitutional principle of the separation of governmental powers. Constitutional guarantees are meant to protect the judiciary from the political caviling that removal power often engenders. The benefits of the integrity of the judiciary should never be supplanted by the temerity and excessiveness which political powers often breed.”

“An independent judiciary is the foundation upon which the entire structure of our constitution rests. The suspension of Justice Uzokwe is a serious threat to this independence, and any impression that this principle is being improperly eroded should be directly and speedily addressed.”

“Justice Uzokwe would seem to be a victim of the government’s plan to harass judicial officials in Abia State. Neither the House of Assembly nor Ikpeazu is constitutionally authorized to suspend Justice Uzokwe without the participation of the NJC.”

“The independence of the judiciary is a barrier to despotism and necessary to secure a steady, upright, and impartial administration of the laws. This independence ought to be promoted and protected by the Abia State government. Executive and legislative invasions of it should never be allowed to stand.”

“A judge is in no sense under the direction of the government. The judiciary is in a place apart, and constitutionally independent. It is of supreme importance, not only that justice be done, but that litigants before the court and the public generally understand that it is being done and that the judge is beholden to no one but God, his/her conscience, and the judicial oath.”

“The framers of our constitution sought to establish the judiciary’s independence and remove undue influence by both the executive and legislative branches by prescribing due process of law for removal of judges.”