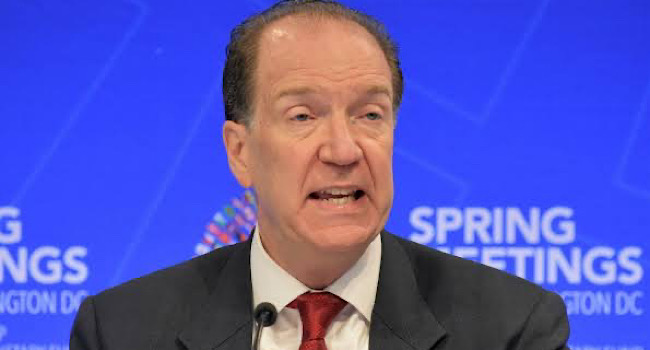 Socio-Economic Rights and Accountability Project (SERAP) has urged the World Bank President Mr David Malpass “to exercise the Bank’s prerogative to release archival records and documents relating to spending on all approved funds to improve access to electricity in Nigeria between 1999 and 2020, the Bank’s role in the implementation of any funded electricity projects, and to identify and name any executed projects, and Nigerian officials, ministries, departments and agencies involved in the execution of such projects.”

The World Bank Board of Directors had last week approved $500m “to help boost access to electricity in Nigeria and improve the performance of the electricity distribution companies in the country.”

But in the application dated 6 February 2021, and signed by SERAP deputy director Kolawole Oluwadare, the organization urged the Bank to “explain the rationale for the approval of $500m to implement electricity projects in the country, despite reports of widespread and systemic corruption in the sector, and the failure of the authorities to enforce a court judgment ordering the release of details of payments to allegedly corrupt electricity contractors who failed to execute any projects.”

SERAP said: “This application is brought pursuant to the World Bank’s Access to Information Policy, which aims to maximize access to information and promote the public good. There is public interest in Nigerians knowing about the Bank’s supervisory role and specifically its involvement in the implementation of electricity projects, which it has so far funded.”

According to SERAP, “The $500m is part of the over one billion dollars available to Nigeria under the project titled: Nigeria Distribution Sector Recovery Program. We would be grateful for details of any transparency and accountability mechanisms under the agreement for the release of funds, including whether there is any provision that would allow Nigerians and civil society to monitor the spending of the money by the government, its agencies, and electricity distribution companies.”

The letter copied to Shubham Chaudhuri, World Bank Country Director for Nigeria, read in part: “SERAP believes that releasing the information and documents would enable Nigerians and civil society to meaningfully engage in the implementation of electricity projects funded by the Bank, contribute to the greater public good, and enhance the Bank’s oft-stated commitment to transparency and accountability.

“The World Bank has been and continues to be involved in overseeing the transfer, disbursement, spending of funds on electricity projects in Nigeria. The Bank also reportedly approved a $750 million loan for Nigeria’s electricity sector in June 2020 to cut tariff shortfalls, protect the poor from price adjustments, and increase power supply to the grid. As such, the World Bank is not a neutral party in this matter.

“SERAP is seriously concerned that the funds approved by the Bank are vulnerable to corruption and mismanagement. The World Bank has a responsibility to ensure that the Nigerian authorities and their agencies are transparent and accountable to Nigerians in how they spend the approved funds for electricity projects in the country, and to reduce vulnerability to corruption and mismanagement.

“SERAP also believes that the release of the requested information and documents is of paramount important to the public interest in preserving the legitimacy, credibility and relevance of the Bank as a leading international development institution. The Bank ought to lead by example in issues such as transparency and public disclosure raised in this request.

“It would also demonstrate that the Bank is willing to put people first in the implementation of its development and governance policies and mandates, as well as remove any suspicion of the Bank’s complicity in the alleged mismanagement of electricity projects-related funds.

“The information is also being sought to improve the ongoing fight against corruption in the country and the provision of regular and uninterrupted electricity supply to Nigerians as a fundamental human right.

“The information requested is not affected by the “deliberative” “corporate administrative matters” or “security and safety” exceptions under the Policy. The information requested is crucially required for Nigerians to know how the funds released to the authorities to improve electricity supply in the country have been spent, and monitor how the funds are being used.

“This report raises specific questions of public interest, and the World Bank ought to be concerned about how Nigerian authorities are addressing reports of widespread and systemic corruption in the electricity sector, and to seek some answers from the authorities on the problems.

Related Topics:David MalpassSERAPWorld Bank
Up Next