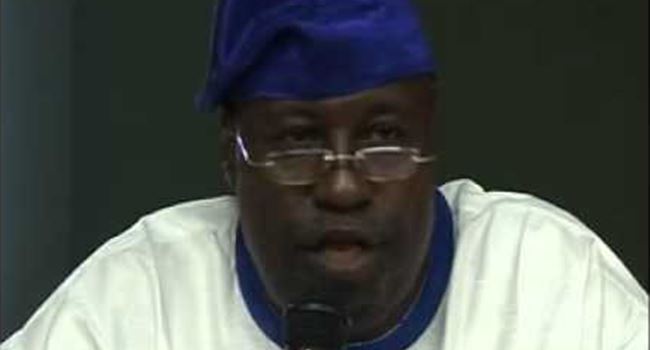 A former Minority Leader of the House of Representatives, Farouk Aliyu, believes that the Service Chiefs are in a better position to address the National Assembly on the lingering insecurity situation in the country as President Muhammadu Buhari is not an orator and should not be the one saddled with such a responsibility.

Aliyu, a member of the ruling All Progressives Congress (APC) and a close ally to Buhari, who spoke on Thursday, insisted that since the Service Chiefs are the ones at the theater of operations, they would do a better job of addressing the National Assembly and they should have been the ones to be summoned to address the issue.

The House of Representatives had, last week, invited Buhari over the rising insecurity following the massacre of rice farmers in the Zabarmari community in Jere local government area of Borno State on Saturday, November 28, by Boko Haram insurgents.

Though the President had agreed to appear before a joint session of the National Assembly on Thursday, December 10, many of his allies had kicked against the invitation.

The Attorney General of the Federation and Minister of Justice, Abubakar Malami (SAN), had, in a statement he issued on Wednesday, December 9, said the National Assembly lacked the constitutional powers to invite Buhari to speak on security matters.

Aliyu who seems to toe the same line with Malami, said:

“There are so many things that the President may divulge and people will say, ‘Why did he even go? He shouldn’t have gone.’

“President Buhari is not an orator. There are orators, people who can talk and talk. People are different.

“If I were to advise Mr. President, I will tell him not to go. He should probably allow the Service Chiefs to go and explain things because there are certain details that should probably be explained in camera.

“As a former minority leader in the House, I don’t think the President should appear, not at this time when things are so difficult and the country is going through challenges.

“Is the President going to appear there to tell the National Assembly the strategies being taken by the government?

“Is he going there for an interactive session? Not even the Speaker can assure the President or his party that Mr. President may not be embarrassed.”