"Set your ovaries free!" - Tribute to a 'bulldozer' | Ripples Nigeria 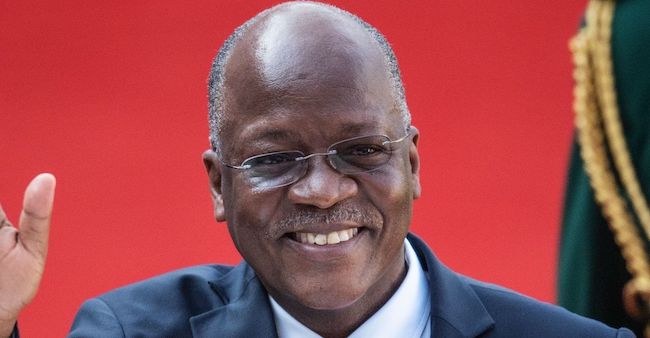 John Pombe Joseph Magufuli was the President of the Republic of Tanzania until last Wednesday when he died officially of “heart complications” at a hospital in Dar-es-Salaam. The son of a peasant farmer who became Tanzania’s President in 2015 died aged 61. He served as Minister of Works, Transport and Communications from 2000 to 2005 and 2010 to 2015. He studied Chemistry and Mathematics at the University of Dar-es-Salaam. After completing his Masters and Doctorate Degree courses he taught chemistry and mathematics before venturing into politics by being elected a member of parliament.

While the government had declared that Magufuli had died of cardiac complications the opposition leaders like Tundu Lissu were saying that he must have died from COVID-19 complications. Mr Magufuli was one of Africa’s most prominent coronavirus sceptics. And he had repeatedly called for prayers and herbal-infused steam therapy to counter the virus. But the pandemic is not a respecter of prayers or herbal concoctions!

Coronavirus is not from God! The devil is more in the details. That is why thus far prayer and fasting are not enough to control its spread across the borders and continents. Science has, however, prevailed by producing a vaccine capable of immunizing folks against the deadly malady.

Before Magufuli fell victim we have had other Presidents and former Presidents (Jerry Rawlings, Pierre Nkurunziza) hitting six feet below as a result of the global health challenge. In Nigeria Mallam Abba Kyari, President Buhari’s Chief of Staff, kicked the bucket after contracting the mortal virus from Germany.

When Coronavirus arrived in Tanzania Mr Magufuli, a devout Catholic, had ignorantly called on his people to go to churches and mosques to pray. “Coronavirus, which is a devil, cannot survive in the body of Christ… It will burn instantly” he had declared. He neither wore masks nor imposed any restrictions like lockdown or curfew even when other countries in the continent were doing the needful to contain the surge in Corona attacks.

Much like Magufuli the late Burundian strongman was an apostle of COVID denial. Like the late Magufuli Nkurunziza had called for prayers and God’s intervention to beat the scourge. Yet God helps those who help themselves as the Scripture counsels us. The civilian bloody dictator of Bujumbura was taken out fatally at his prime.

The difference between Nkurunziza and Magufuli is in efficient governance and delivery of democracy dividends. While the executive footballer preoccupied himself with unconstitutional power elongation and criminal abuse of the Burundian constitution Magufuli the mathematician concentrated his efforts in emulating the late reverred statesman, Julius Nyerere, the founding father of the nation.

Alas he was covidly knocked off presidential stage in a blaze of glory. He could be likened to a man hit fatally by a COVID bulldozer he could not control even though he was used to bulldozing his way through as a Minister or President.

Magufuli was ecentric but efficient; he was audacious as he was intrepid. He went about the business of governance with the seriousness it deserved. History would remember him for the right things he did and the wrong steps he took. That is what leadership is all about: improving lives, taming the outlaws, battering the corrupt and bettering society for good.

Once praised for his no-nonsense approach he went on to become a controversial leader who outlawed neswpapers and repressed freedom of speech. Yet whatever he did could be forgiven given his giant strides in infrastructural development. He meant well for his people, for his country.

In July 2019 the late President had called on Tanzanian women to “set your ovaries free and bear more children so that the country can enjoy demographic dividends”. According to Magufuli who cited Nigeria and China as examples: “When you have a big population you build the economy. That’s why China’s economy is so huge….I know that those who like to block ovaries will complain about my remarks. Set your ovaries free, let them block theirs.”

By asking the Tanzanian women to “free their ovaries” he was trying to be ambitious in the demographic race for dominance. It is true that China and Nigeria are dominating the Asian and African socio-economic narratives with their huge populations as factor. So why not have more offsprings to increase our population and workforce? But with population explosion comes its problems and troubles.

With 56 million people Tanzania cannot be said to be underpopulated. But Magufuli wanted more in order to compete with Nigeria! What he never knew was the problems confronting Nigeria in terms of the (mis) management of her diversity. Corruption, politicial mediocrity and hunger and illiteracy.

During the presidential campaign for the 2015 general elections Magufuli who ran on the platform of the ruling Chama Cha Mapinduzi (CCM) party told a cheering crowd that he knew what it meant to be poor having been a cattle herder and milk and fish seller himself! He never pretended to be a son of a rich man.

Majority of Tanzanians believe their fallen President had been a good leader, an agent of development and a patriot. Despite his presidential strenghts and weaknesses Magufuli would remain in the hearts of his people for a long time as a corruption nemesis and a champion of equity and justice.

He was known as a “bulldozer” for his achievements when he was the Minister of Works under former President Jakaya Kikwete. He performed beyond expectation that he was re-appointed to the same ministry. And when the time came for Kikwete’s successor he was naturally chosen to flag the ruling party’s flag in the presidential election.

Following Magufuli’s demise Tanzania has a female President. The country’s erstwhile Vice-President, Ms Samia Suluhu Hassan, had been sworn in as President according to the constitutional provision. She would remain in power until 2025 when another round of presidential poll would be held.

Tanzania can now boast of producing a she-presidency like what happened in Liberia under Ellen Johnson-Sirleaf and Malawi under Joyce Banda. And presently in Ethiopia with Sahle-Work Zewde though she is a ceremonial powerless Head of State. The Prime Minister, Abiy Ahmed, is saddled with executive power.

The transition post-Magufuli passed off swiftly without any tension or controversy from any quarters. President Hassan, a muslim, never needed any ‘doctrine of neccesity’ from the parliament to ascend to the presidential throne. The constitution was followed to the letter.

Unlike in Nigeria following the demise of ex-President Umaru Yar’Adua the Senate had to intervene to ensure the enthronement of former President Goodluck Jonathan as President.

If I were to write a book on the late Tanzanian President I would have preferred, title-wise, going for: Set Your Ovaries Free — Tribute To A Bulldozer! Or better still: Magufuli: The Advocate of Free Ovaries!

Related Topics:MagufuliTanzania’s President
Up Next

Should we pray for recolonization?