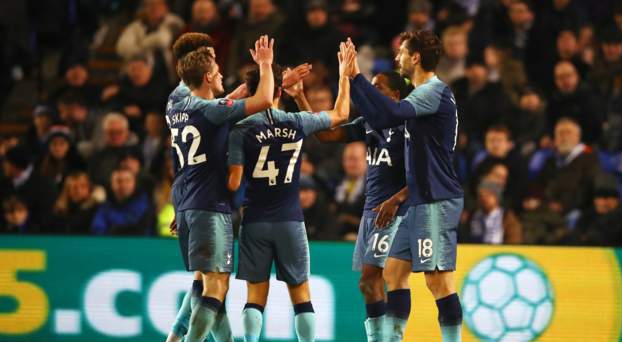 Tottenham Hotspur have set a new club record after securing a 7-0 victory over Tranmere in an English FA Cup encounter on Friday night.

The Premier League side sealed their biggest away win in all competitive matches since the club was founded in 1882.

Fernando Llorente scored a hat-trick, Son Heung-min scored and Serge Aurier netted a brace to end the hopes of the League Two club advancing to the next round.

England striker, Harry Kane also got on the scoresheet as he came off the bench to score his 19th goal of the season and cap off a big win for Tottenham, who progress easily into the fourth round.

Speaking after the win, Spurs boss Mauricio Pochettino said: “I am very pleased but very cold! We were very solid, they worked very hard in the first half and of course, we were a little bit lucky to open the scoring.

“In the second half we found space and were very clincial in front of goal. It was 7-0 but it was very tough to open the scoring.”

When asked if he will improve his squad this January with new players, the Argentine said it would be difficult.

“It is difficult to sign anyone this month. If we can find someone to improve us then we are open but it is so difficult,” he said.