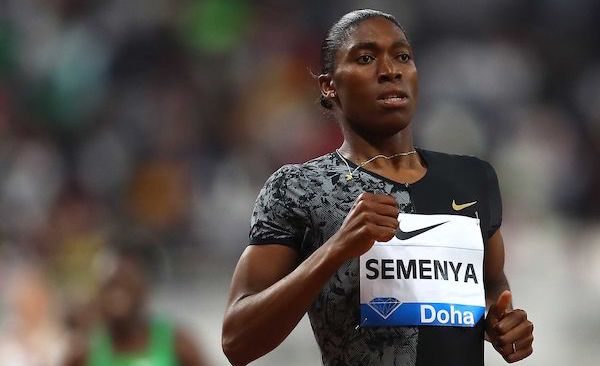 Caster Semenya, the South African two-time Olympic champion at 800 meters will not be eligible to participate at this year’s world track and field championships. The Swiss Supreme Court on Tuesday, July 30, 2019, reversed its earlier suspension of the ‘Eligibility Regulations for the Female Classification for athletes with differences of sex development’ imposed by the International Association of Athletes Federation (IAAF).

Sex testing was designed to eliminate intersex conditions or hormone imbalances that could give an unfair advantage to a competitor. It is seen as a medical issue and not one of sex or gender or male or female. This practice is not new; it dates back to the sixties when there were complaints or allegations that Soviet-bloc countries were entering male athletes in women’s events. The tests found several athletes who were born with genetic defects that made them appear to be men, at least according to lab results.

In 1967, the Polish sprinter Ewa Klobukowska was barred from the sport because she failed the chromosomal test. In the 1980s, the Spanish hurdler Maria José MartínezPatino was disqualified because the test revealed that she was born with a Y chromosome. Her eligibility was reinstated in 1988. The Indian runner Santhi Soundarajan lost her 800m silver medal after failing a sex test at the 2006 Asian Games in Doha.

Complicated sex disorders abound and can confuse sexual identity, for example, a disorder known as congenital adrenal hyperplasia gives women excess testosterone from a source other than the testes — the adrenal glands. In mild cases, genitals may appear normal and often no one suspects the problem. Women with the disorder are allowed to compete as females. Some genetic males, for example, have mutations in a gene needed to form testes.

Although they look like women, genetically they are men, with an X chromosome and a Y. The International Association of Athletics Federations (IAAF) should be allowed to investigate sex ambiguity. I do however have reservations with the method adopted for the test and the shoddy management of information by the IAAF in the case of Semenya. Herein for me lie most of the questions.

Why single out an athlete for sex testing? Wouldn’t it be fairer for everyone to be tested in the same way and at the same time? The IAAF should not be able to pick and choose who undergoes this kind of testing, especially given that most of the female athletes are muscular. If one woman has to undergo this kind of test, shouldn’t all of them be tested? To single out one athlete for testing raises the issue of discrimination which is why some persons have alleged racism on the part of the IAAF in the Caster Semenya case.

The issue of waiting until there is an allegation. Could the test not be done before a Competition? Why wait until there are innuendos and allegations? The allegations could not have been new. They must have followed the athlete for some time. Was it necessary for these deeply personal issues to be paraded before the world, subjecting an athlete to forensic scrutiny and speculation of a kind that must have led not merely to deep anxiety but also intense embarrassment?

Could these investigations not have taken place in private with the authorities refusing to comment on whether they were even taking place? Should confidentiality not be part and parcel of IAAF procedure? In short, could this not have been handled with infinitely greater sensitivity, given the incalculable trauma the athlete has to endure? This raises privacy concerns.

What if a man is born with XX chromosome instead of XY and he breaks every male record in the books? Is he a man or do we create a new gender category of our species just so he does not embarrass the rest of us too much? What would happen with transgender individuals? If a male had had their sex organs rearranged and entered for the Olympics and won but that win was called in question what would happen then?

Would the IAAF not save itself a lot of trouble if it adopts the visual inspection since at the genetic/chromosomal level any answer provided will only prove inconclusive? Will it be right to ascribe to the IAAF powers to determine who meets the male or female test and can compete considering the hazy nature of the results? Are we saying that women can only improve slowly, shouldn’t be muscular, and should always have a high pitched voice?

What is the sense in compelling an athlete to take medication to lower performance? Does it not go against the spirit of the sport which is that athletes compete at their most natural state? Do performance-limiting drugs not hurt sports?

These questions may never be answered. They will continue to agitate the minds of experts. What is, however, clear is that privacy rights have been abused, reputations damaged by the sex testing? No female athlete sex tested ever really recovers. If she is cleared, she certainly will still have to live with doubts as to her true position.

If she is not, suspicions as to the real motive for her disqualification will no doubt live with us for some time. While I can’t help agreeing with the idea that the application of sex testing is hardly consistent, at the same time I would hesitate at the idea that men should be able to compete in women’s events.