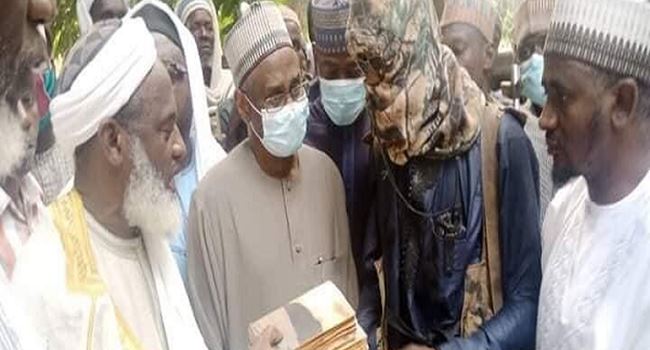 An Islamic scholar, Sheikh Ahmad Gumi, on Thursday reportedly met with the kidnappers of the Kagara schoolchildren.

Ripples Nigeria gathered that the criminals relayed their demands to the cleric in the peace talks which reportedly took place in Tagina forest, Niger State.

There has been no official confirmation of the meeting between the clerics and the bandits from the state government.

Gumi came under intense criticism last week after advocating for amnesty for the criminals carrying out kidnappings and banditry in different parts of Northern Nigeria.

During an interview with BBC Hausa, the cleric blamed the Nigerian military for the violent crimes in the Northern region.

He said the bandits he met were willing to lay down their arms but that the military top brass was deliberately escalating the violence.

He said; “Everyone has witnessed it that we negotiated with these people and they promised to drop their weapons and stop these activities, and I even promised to meet the president about the matter. But why will the army bomb their place?”

But the military denied his claims.

This recent visit to Tagina forest came in the aftermath of the abduction of about 42 persons, including students, staff and their families from the Government Science College Kagara in Niger State on Wednesday.

Multiple reports said gunmen attacked the school around 2:00 am on Wednesday, beginning with sporadic gunshots. A student was killed during the attack.

In his reaction, the Niger State Governor, Abubakar Sani Bello pledged never to negotiate with bandits.