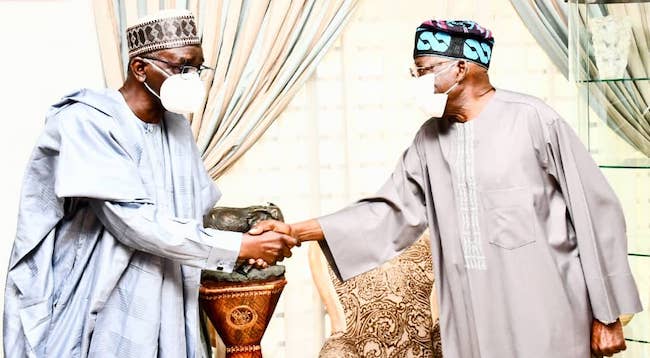 The former governor of Kano State, Ibrahim Shekarau, on Sunday visited the National Leader of the All Progressives Congress (APC), Bola Ahmed Tinubu, at his Ikoyi residence in Lagos.

Shekarau’s visit to the former Lagos State governor came just five days after the Federal Capital Territory High Court sitting in Maitama, Abuja, handed over the APC structure in the state to his faction.

The Kano State government later rejected the verdict over the court’s lack of jurisdiction to adjudicate in the matter.

The government did not stop there, the office of Shekarau’s lawyer, Nureini Jimoh, was sealed off over unpaid rents.

The building was later reopened after a public outcry.

The meeting may be part of the former Minister of Education’s move to forge a closer relationship with the APC national leader now that the party’s structure in Kano is under his control.

Ganduje is one of Tinubu’s strongest allies in the North and has spearheaded the ex-Lagos governor’s 2023 presidential bid in the region.

However, it remains to be seen if the APC chieftain will be swayed by the ex-minister’s visit and dump Ganduje as the fight for the party’s soul in Kano festers.