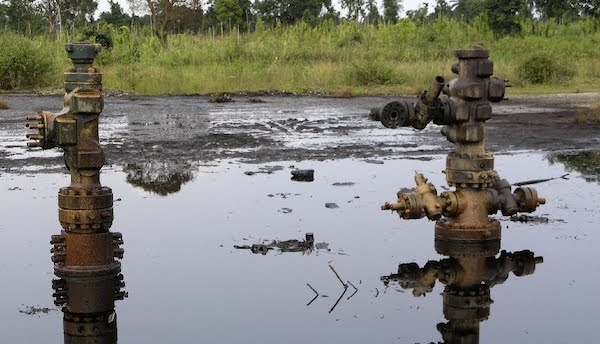 The Shell Petroleum Development Company (SPDC) has confirmed an oil spill from its facility at Agbura-Otuokpoti area of Yenagoa, the state capital.

The company’s Media Relations Manager, Bamidele Odugbesan, confirmed the incident in a statement in Yenagoa on Friday, April 2.

Odugbesan said the company got a report of the spill on March 31.

“At about 8.30 am on March 31, a community surveillance vendor reported a leak on the company’s Joint Venture pipeline at Nun River in Bayelsa.

“Following the development, the facility was shut down and full isolation established at 09.45 am.

“The SPDC Oil Spill Response Team was mobilised to the spill site and was able to contain the spill to prevent further spread.

“The Joint Investigation Visit team led by government regulator will determine the cause and impact of the spill,” Odugbesan said.

He, however, said that there was an anonymous note found at the spill site, suggesting sabotage.

Residents, who said the oil workers had yet to come to the site as of Friday, have resorted to scooping oil from the water surface into drums.

Ripples Nigeria had reported in February that the UK Supreme Court allowed a group of 42,500 Nigerian farmers and fishermen to sue Royal Dutch Shell (RDS) in English courts after years of oil spills in the Niger Delta contaminated land and groundwater.

Represented by law firm Leigh Day, the group of Nigerians had argued that the parent company Shell owed them a duty of care because it either had significant control of and was responsible for, its subsidiary SPDC.

APC charges Christians to pray for Nigerian leaders at Easter