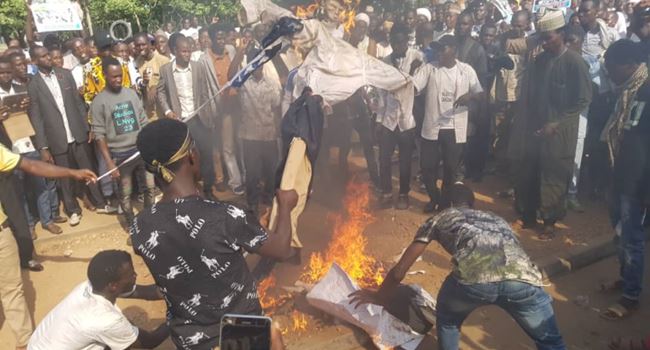 In demonstration of their protest, members of the Islamic Movement in Nigeria who are popularly known as Shiites on Friday set ablaze flags of the United State and Isreal in Abuja.

The protest according to information gathered, is bordering on the killing of some Muslims in Palestine.

In the protest which kicked off at the National Mosque after the Jumaa’t prayer was blocked at the Julius Berger roundabout by policemen.

They were heard shouting ‘Free Zakzaky, Free Palestine, Down To America’, and later gathered under a bridge, displaying the flags of the two countries which they later set ablaze.

The situation led to disruptions of traffic movement in the city as the flow of vehicular movement was hindered.

Recall that the group has been demanding the release of their leader, Sheik Ibraheem El-Zakzaky, who has been in detention since December 2015.