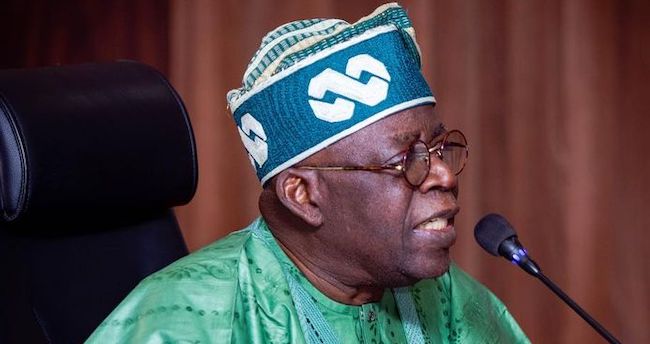 Shonekan was appointed the head of the interim government by former military president Ibrahim Babangida in August 1993.

Babangida was forced to “step aside” after Nigerians and the international community protested the controversial annulment of the June 12, 1993, presidential election.

Shonekan, a boardroom guru, was ousted in a palace coup by the late Gen. Sani Abacha on November 17, 1993.

Tinubu was one of the key members of the National Democratic Coalition (NADECO) that fought for the return of democratic rule in the country in 1999.

The former Lagos State governor, who spoke at the public presentation of a book titled: “Nigeria’s Aborted 3rd Republic and the June 12 Debacle: Reporters’ Account” at the National Press Centre of Radio House in Abuja, said the ING was designed to fail by powerful elements in the military at the time.

Tinubu, who was represented at the event by the Director of Media and Publicity of APC Presidential Campaign Council, Bayo Onanuga, said Nigeria practiced what he described as diarchy with elected state governors being supervised by a military president (Babangida) in the short-lived Third Republic.

Tinubu said: “The Third Republic was not expected to last long. Indeed, of all our nation’s republics, it was the shortest: it began in January 1992 following the election of state governors in December 1991. It ended on November 17, 1993, with the Abacha coup against the Interim Government of Ernest Shonekan. This happened some five months after the annulment of the June 12, 1993 election, won by Moshood Kashimawo Abiola.

“The entire transition programme of the military administration of the time, according to discerning critics, was designed to fail. It was, they said, meant to make then military president Ibrahim Babangida succeed himself as a civilian president.

“The journey to the short-lived Republic began in 1986 when the military junta announced a transition programme, setting 1990 as the terminal date. New leaders at all levels of government were to be elected to usher in the Republic. But no sooner than the programme was announced that the government began to tinker with it, brewing accusations of a hidden agenda.

“The transition programme was first extended by two years and then extended by another year to terminate in 1993. During the seven-year transition, Nigerian politicians were turned into guinea pigs for political experimentation. First, the military government attempted to clone a new set of politicians known as the ‘Newbreed.’

“It introduced Option A4, a system of voting done by queuing behind candidates, a novelty in the making of democratic choices. It imposed a two-party system, with defined ideologies.”