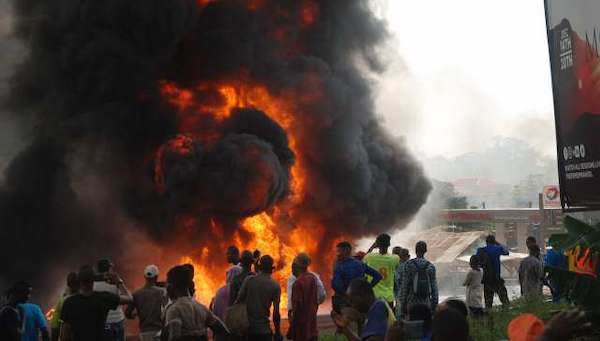 A tanker loaded with a petroleum product exploded at Iyagankun area of Ibadan, Oyo State, on Friday.

Several shops and a car were razed in the incident.

The incident occurred when the tanker which was trying to maneuver in the area, fell into a ditch and leaked its content into a nearby river.

The tanker exploded and triggered a fire which spread to some furniture shops, auto shops and buildings in the area.

Men of the state fire service were quickly deployed to the scene to quell the inferno.

A commercial motorcycle operator, Suraj Adewale, who was at the scene of the incident, said the tanker fell at about 12noon but caught fire two hours later.

The Sector Commander of the Federal Road Safety Corps (FRSC) in the state, Mrs. Uche Chukwurah, who confirmed the incident to journalists, said several shops were razed in the incident.

She, however, said no life was lost in the explosion.

Chukwurah said: “A tanker fell this afternoon and it eventually caught fire. Our men are there to control the traffic.”