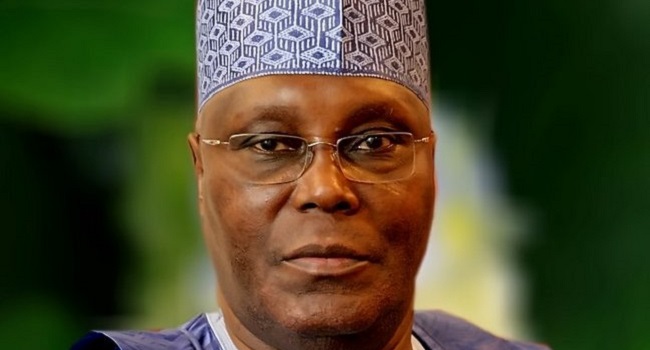 The pro-Buhari group was reacting to claims by the former Vice President that the Buhari administration made FIRS to include Obasanjo Farms Nigeria Ltd. (OFN) in the list of over 19,000 firms that defaulted in tax payment.

The BMO threw the challenge in a statement signed by its Chairman, Niyi Akinsiju and Secretary, Cassidy Madueke, adding that it was concerned that Atiku was making spurious claims against national institutions for political reasons.

The statement reads in part: “Nigerians should be concerned that the former Vice President is acting like a bull in a China shop with the manner he has been launching scathing attacks against government agencies, all in a bid to remain relevant.

“Is it not surprising that a statement that was couched as a response to a media report on a visit by operatives of the Economic and Financial Crimes Commission (EFCC) to the Obasanjo Library, as part of an investigation into alleged money laundering by Atiku’s associates, could be used to cast aspersions on the FIRS?

“The unspoken message from the former Vice President is that it was wrong for the EFCC and FIRS to beam their searchlight on his former principal regardless of what he may have done. Aside from the subtle message, Atiku was also emphatic in accusing the President of unleashing the two agencies against the former President.

“What he is doing is tantamount to putting up a defence for fraud and criminality, and trashing the reputation of some of the agencies he once boasted to have played a prominent role in their establishment.

“We know that using anti-graft agencies against perceived opposition was the hallmark of the government Alhaji Atiku Abubakar was part of, but it is disingenuous for him to even think that this government would toe a similar path.

“This is a President that most Nigerians agree is interested in building institutions and is giving anti-graft agencies all the free hand they require to do their jobs according to the dictates of the act establishing them.

Read also: Every Nigerian deserves to be rich —Osinbajo

“We also make bold to say that only an unpatriotic Nigerian would suggest that the authorities smuggled General Obasanjo’s name into a list of tax evaders because he was critical of the Buhari administration. If Obasanjo did not have a problem with paying his taxes, his name would not have been on the list,” BMO said.

The group also called on the Presidential candidate candidate of the Peoples Democratic Party (PDP) in the 2019 general elections, to take up the challenge of clearing his former principal’s name, if he was sure Obasanjo Farms had paid all its taxes as at when due.

BMO said: “If indeed Atiku has more facts than what the FIRS has presented, we challenge him to go to court to prove that General Obasanjo was falsely and libellously included in the tax default list.

“It is absolutely wrong for a former Vice president to continually indulge in lies and false narratives just to present the Buhari administration in bad light so we urge him to put his money where his mouth is and prove that the FIRS lied against his new-found hero.

“We also find it amusing that Atiku dragged in a young musician whose company is also on the FIRS list and concluded that it was because he played a prominent role in PDP’s gubernatorial campaign in Osun State. Unbelievable! And to think that this man was once a heartbeat away from being the President of this country!

“This only confirms what we have been saying about the former Vice President; he is one man that likes throwing allegations around and hope that no one would notice how shallow they are.

“As for his spirited defence of his son-in-law, we know that there is no law stopping him from showing up in court to stand as a witness, so it may be ideal for him to consider that rather than his resort to the media on a regular basis to malign the EFCC.”