Since 2007, I have rejected 3 ministerial offers- Ezekwesili | Ripples Nigeria 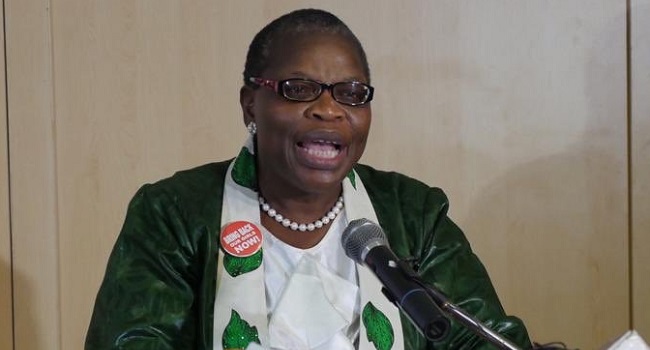 Following her withdrawal from the 2019 presidential race, Oby Ezekwesili, candidate of the Allied Congress Party of Nigeria (ACPN), has dismissed allegations that her ambition was a scheme to negotiate for a ministerial position.

Ezekwesili made the denial at a press conference in Abuja on Monday, saying that she ran a promising campaign for the good of the country and all citizens.

According to her, the allegations were made up by desperate politicians to slander her integrity and good track record in the country.

“One of the laughable moments of the past week was hearing allegations that my presidential candidacy was a scheme to negotiate for a ministerial role.

“This is the height of political comedy, I must say, and a plot by desperate politicians to slander my integrity and reputation in the country.

“Since I resigned as a cabinet minister in 2007, it is known that I have declined offers by different governments to serve as a minister again.

“Why would I then go through the pains of launching a presidential campaign to negotiate for a role I last occupied twelve years ago and have thrice rejected since after.

“I want you all fellow Nigerians to know that those allegations are alien to my character and pedigree as a person,” she said.

The former ACPN presidential candidate also denied the allegations that she raised and looted campaign donations meant for the presidential race and described it as morally bankrupt politics.

However, Ezewkwesili urged those who intended to vote for her, instead to cast their votes for the consensus candidate that would emerge from coalition of credible alternatives in the coming days.

“Those who supported my candidacy are most likely those who share my dreams and vision for a new Nigeria.

“Our mission to uproot the decadent APC and PDP political class and replace them with new order leadership is worth fighting for,” she said.

Her party leadership had also endorsed President Muhammadu Buhari of the All Progressives Congress (APC) following her withdrawal.

Despite my anti-corruption war, govt agencies under me still corrupt- Buhari