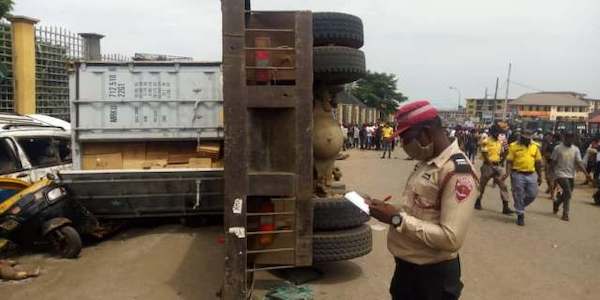 The Federal Road Safety Corps (FRSC) said on Tuesday at least six people were killed after a container fell on vehicles along Awka-Onitsha Expressway in Anambra State.

The Anambra Sector Commander of FRSC, Andrew Kumapayi, who confirmed the incident to journalists in Awka, said the container fell on the vehicles after the driver of the truck carrying the item lost control of the vehicle due to brake failure.

He said the accident occurred at 10:46 a.m. near TRACAS bus stop on the highway.

“A total of 10 people – eight male adults and two female adults – were involved in the crash. The victims were rushed to Toronto Hospital, Onitsha, by the FRSC rescue team from Upper Iweka Outpost.

“Out of the 10 people involved, six (five male and one female) were confirmed dead at the hospital, while four males were critically injured, but responding to treatment.

“The corpses were deposited at the morgue in the same hospital.”