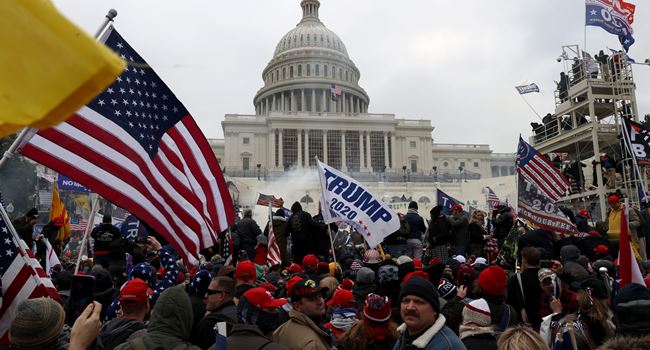 Six police officers from the US Capitol Police department have been dismissed after a probe found they broke rules of conduct on January 6 at the Capitol Building during the riot staged by supporters of former President Donald Trump.

A department spokesperson said on Saturday that 29 other US Capitol Police officers were also suspended with pay, pending further investigations into police conduct.

Jon Stolnis, a police spokesperson told CNN that “Acting Chief Yogananda Pittman has directed that any member of her department whose behaviour is not in keeping with the Department’s Rules of Conduct will face appropriate discipline.”

It comes after Pittman, the acting chief of US Capitol Police department, said in January that the department was “actively reviewing video and other open source materials of some USCP officers and officials that appear to be in violation of Department regulations and policies.”

Concerns were raised that not only did the police department and other law enforcement agencies failed to prepare for the January 6 attack, but that some police officers allegedly guided and assisted those who broke into the country’s legislature.

Democrat congressman Tim Ryan said one officer who was suspended took a selfie with a rioter who broke into Congress, while another officer wore a “Make America Great Again” cap.

Ryan also told CNN that the same officer appeared to direct rioters around the US Capitol building as it came under attack by Trump supporters.

Two accused rioters recently told FBI investigators that a Capitol Police officer told them: “It’s your house now” after they broke into the Capitol, and shook hands with them.

The pair are thought to be among 29 rioters who told investigators they believed they were allowed inside the US Capitol building because police did not direct them to leave, as analysis of court documents carried out by ABC News showed.

The findings come after 10 US Capitol Police officers were said to be under investigation in January, with two others suspended, following claims that they assisted rioters who besieged the Capitol building.

At least seven officers from police departments across the country have also come under investigation for alleged roles in the Capitol attack.