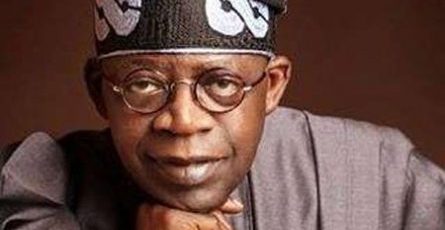 Last week, the national headquarters of the All Progressives Congress (APC) in Abuja, ‘hosted’ its first ever public demonstration calling on President Muhammadu Buhari to remove Chief John Odigie-Oyegun from office as National Chairman of the party.

The call was specific. It was made to President Buhari, who as National leader of the party, had appointed Asiwaju Bola Tinubu, one time governor of Lagos state, to lead the charge in reconciling aggrieved members of the party.

In appointing Tinubu, President Buhari demonstrated an acknowledgment that the party had become fractious and was heading for a split especially with the seeming resurgence of the Peoples Democratic Party (PDP), and the realignment of forces for the politics of the 2019-2013 season.

The protest, had banners and placards calling on Oyegun to quit as the party’s national chairman. The next day, the protesters surfaced at the Abuja headquarters of the Economic and Financial Crimes Commission (EFCC) calling for a probe into how Oyegun has allegedly single-handedly managed the party’s finances.

Many familiar with Lagos politics contend that the protests had all the trappings of a Tinubu handwork, who it seems began his work of reconciling the party’s members by cleverly reigniting his own call, made in 2016, for Oyegun to resign.

Tinubu had in September 2016, in a public statement made available to the media, by his Media Office asked Oyegun to quit for allegedly subverting the will of the party in the Ondo state governorship election.

The former Lagos State helmsman had massed his machinery behind Segun Abraham forcing 20 other aspirants to withdraw from the race and also back him. However, Oyegun and the leadership of the party pulled a fast one which ensured that Rotimi Akeredolu got the party’s ticket.

Tinubu did not forgive Oyegun for the humiliation, more so that Akeredolu had distanced himself from Tinubu and refused to kowtow to him in the race for the governorship.

Angered by this, Tinubu wrote in the public statement calling for Oyegun’s resignation that: “Oyegun’s comportment regarding the Ondo state primary will become the textbook definition of political treachery and malfeasance of the basest order”.

Tinubu emphasized, that: “To rescue the party, Oyegun must go”.

There are those who argue therefore, that leading the reconciliation team will empower Tinubu to cut his pound of flesh and seek revenge for the ‘wrong’ done him by Oyegun in 2016 over the Ondo state governorship primary election.

But that is not all. The man Buhari has picked to save the party, said also in the letter that “If Tinubu is to choose between John Oyegun and progress towards a better Nigeria, the choice has already been made”.

Developments in the party have however shown that there are many Oyeguns which Tinubu must do away with to achieve his vision of “progress towards a better Nigeria”. Tinubu has yet to sit at the same table with the beneficiary of the ‘fraud’ in Ondo state, Gov. Akeredolu.

He is also yet to sit with Senate President, Dr. Bukola Saraki, who played a fast one against the party, to beat Ahmed Lawan, who was the choice candidate for the seat of Senate President.

When accosted by newsmen in June 2015 to react the the emergence of Saraki as Senate President, an obviously unhappy Tinubu simply said: “I have no comment, I have no reaction”.

There are also arguments within sections of the party, that the APC leader is not even too sure where he stands with President Buhari and some members of his kitchen cabinet.

In the race to the leadership of the Senate, Saraki toppled plans by Tinubu to handpick Senator Lawan as president. Saraki allegedly connived with PDP members of the Senate to win in an election conducted at a time APC senators trooped out to attend to a matter that had nothing to do with the business of the Senate.

APC has a bagful of dissentions. The party has been unable to organize and hold a national convention since 2015. It has also been unable to inaugurate its Board of Trustees (BoT), though it had issued appointment letters to those appointed to the board. These two, analysts say, are evidence of a deep crack in the party; the fear of which is restraining members from going ahead with the convention and inauguration of the BoT.

It is feared that a convention will implode the party. The disagreements stem from states where governors are at logger-heads with some party leaders considered to be strategic to its wellbeing.

In Kano state for instance, the Governor Umar Ganduje/Sen. Musa Kwankwaso fight has already rendered the party lame, making PDP have the last laugh there. Kaduna state is not left out. The Senator Suleiman Hunkuyi Vs GovernorNasir el-Rufai and Sen. Shehu Musa v El-Rufai tango leaves the party reeling. The fights have even led to the establishment of an alternate headquarters of the party in the state. This indicates a split.

In Imo state, efforts are on by leaders of the party to distance APC from whatever programmes Governor Rochas Okorocha is pursuing. There are also bigger threats to the unity of the party massing up Sen. Ifeanyi Araraume, Chief Osita Izunaso who is National Organizing Secretary of the party and Sen. Benjamin Uwajumogu among many others against Gov. Okorocha.

Read also: I believe PDP will return to power in 2019 because APC has failed- GEJ

In Ogun state, Governor Ibikunle Amosun is massed against Sen. Solomon Adeola, another Tinubu ‘boy’ who aspires to succeed the incumbent as governor in 2019. As it is, perhaps, the only state where there is a semblance of peace within the APC is Lagos state. That, fortunately, is the only state where Tinubu has a strong voice over how things run.

For APC, reconciliation may be far-fetched. This is because the grouse of a lot of members of the party are not necessarily against their fellow party members but with the President. Many see the President as running a one-man show at the Presidency. In a situation where the party ought to be supreme and hold regular consultations with the president over implementation of the party manifesto, President Buhari is seen largely as running his private show. He does not consult with party organs on issues.

The president has not hidden his aversion for the party. Largely, he ignores the party and its leadership. He is believed to have assigned Tinubu the latest task in efforts to draw him close for strategic survival reasons, because for a soldier, an enemy is best kept within view.

Buhari has never been seen to have acknowledged the manifesto of the APC, but runs his own program. This irks many members of the party who believe that there is nothing anyone can do to bend him. For them, 2019 is a window.

One-time speaker of the House of Representatives, Ghali Umar Na’abba had said, while distancing himself from Buhari, that the president considers politicians as evil. This may account for why he does not want to have much to do with them. Perhaps, it was for this reason too that he have refused to change his cabinet and reward those who invested in his election in 2015.

Herein lies another set of aggrieved members of the party Tinubu would have to deal with. These ones have their grouse with the president himself, as once confirmed by his own wife, Aisha.

For Tinubu to succeed in reconciling aggrieved members therefore, he must first revisit his position on Oyegun and also seek to reconcile himself with President Buhari and Saraki. Then, he must explain to those who invested in Buhari’s election why the jobs promised them may not materialize before 2019.

He must also reconcile the president with party members most of who are disappointed with his lackluster performance especially in addressing the Fulani herdsmen’s murderous rampage across the country.

No doubt a daunting task that could break or make APC as the general elections fast approach.